We had breakfast and coffee as usual but Linda had to leave at 9 AM for a 10 o’clock meeting at the bakery.  I had the fireplace on and hot coffee in my cup so I just stayed put in the living room in my warm winter robe.  I was finishing yesterday’s post when I got a call from Joe Cannarozzi looking for Chuck Spera’s phone number.  My N/A/P book is in my phone so after we were done talking I looked it up and texted it back to him.

After wrapping up yesterday’s blog post and starting today’s I spent a little time with the manual for the new Sony a99v DSLT camera and added a BC-VM10 battery charger to my B&H Photo cart.  Around 10:15 AM I made a follow up phone call to John Palmer at Palmer Energy Systems regarding the terminal block for the Magnum Energy Battery Monitor Kit (BMK).  John had not had a chance to talk to anyone from Magnum and indicated that his main contacts were away at a trade show.  He will still try to follow up with them but thought I might do just as well calling them directly.  They are in Washington State but are relocating to Minnesota as a result of being purchased by Sensata Technologies so I deferred the call until later today.  John said their phone and e-mail contact information had not changed yet, but he thought it might eventually as a result of the sale to Sensata and relocation to Minnesota.

There wasn’t much I could do with the desk in the bus without Linda’s help so I gathered up the laundry and started a load.  I then worked in my office for a while.  I was going to off-load photos from both the Sony a100 and Sony a99v but the Play Memories Home software indicated that updates were available and certain features (social media website interaction) required the newest version.  While I do not plan to interact with social media very much, photographically, I might want to at some point.  Besides, I like to have my software as up-to-date as possible.

The version that came on the CD-ROM was 1.03.something and the latest version from Sony’s website was 5.03.something, so my camera body was probably sitting at B&H Photo for quite a while.  The installer was a 15.6 MB download and program was a lot bigger than that.  It took over an hour to download, install, and then re-scan all of the images in the PICTURE folder, even though it just did this on Tuesday.  While I was waiting I got a solicitation from the Michigan VFW and agreed to send them a small donation of $10.

Rather than sit and stare at my computer screen I got the mail and then called Magnum Energy and asked for technical support.  I was caller number six in line to talk to someone so I selected the return call option from their menu and left my name.  Their system had already captured my phone number but had me confirm it.

One of the things I need to do with the new Sony a99v camera is figure out whether my old flash equipment can be used with it.  I found my Sunpak ring flash, my Metz CT-45, and my two Quantum Turbo gel cell battery packs.  The battery packs had their chargers connected so I set them up in the ham shack and plugged them in.

Linda called at 3 PM to let me know she was just leaving the bakery and planned to stop at Meijer’s.  That meant we would not be finishing the desk installation until tomorrow.  At that point I had not yet heard back from Magnum Energy; so much for being number six in line for a call back. 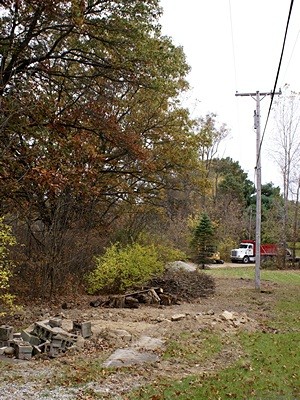 Debris piled where the new driveway extension will go. Phil’s truck and large excavator in the distance on the road at the discharge end of the culvert.

I was just about to return to my office when Phil Jarrell showed up at 3:10 PM.  I put on my outdoor work shoes and sweatshirt and went out to join him.  We looked at the discharge end of the culvert and agreed on a game plan.  He unloaded his excavator with the 30″ toothed bucket attached, drove it back into the woods well beyond the end of the metal culvert, turned it around, and brought it back towards the culvert.  Phil’s Caterpillar excavator is a powerful machine and he was able to dig the large root loose that was blocking the outlet of the culvert.  He then dug a trench back from there for about 20 feet, clearing out lots of other stuff as he went, and then stopped.

Linda got home at 4 PM after deciding not to stop at Meijer’s after all.  I walked back to the house and suggested she come see what Phil was doing.  She did and then went back inside to do some bakery-related work at her computer. 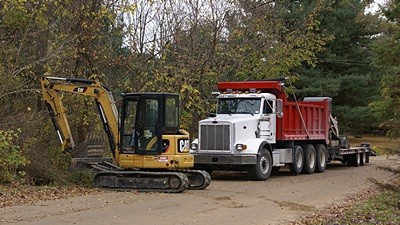 A closer view of Phil’s truck and excavator. He can move a lot of dirt, rock, and anything else he wants with this thing.

Phil used a shovel to clean out the end of the culvert, which was already filled with mud, so he could determine the elevation of the top and bottom of the discharge end of the culvert.  He then set up his laser level and started taking readings.  The 12″ diameter culvert drops 9 inches from the high end to the low end.  Phil said a 2″ drop would have been sufficient and the 9″ drop is actually a problem.  If it only dropped two inches most of the discharge end would be above grade.  But that is not the situation so we started working our way into the woods checking the elevation as we went. 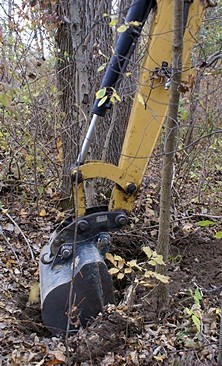 The excavator positioned in the woods digging the large root out from in front of the discharge end of the culvert under the road.

By sighting down the center of the road in front of our house I determined roughly where the property line was.  Phil determined that if we continued trenching straight out from the culvert to the property line we would be out a total distance of about 50 feet and would be seven inches below the bottom of the inlet side of the culvert.  He also pointed out the soil he had already dug was very sandy and should drain well.  The fact that this whole wooded area had grass growing in it provided further evidence that it drained well.  A high clay soil would have held water and created an inhospitable environment for grass.

It was well past 5 PM and with the cloudy skies the light was fading so Phil did not want to go any farther today.  He also needed to get fuel in his front loader so it was ready to go first thing tomorrow.  He parked the excavator where it was out of the way and locked it before taking off. 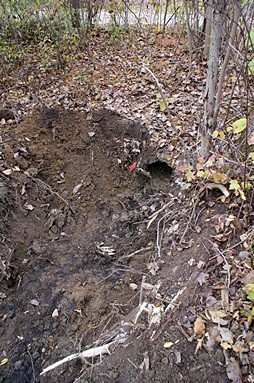 The discharge end of the culvert (dark hole center right) with tree roots, dirt, and other debris cleared out of the way.  The light gray horizonal stripe at the top of the screen is the road.

Linda made a wonderful pasta dish for dinner.  She used a whole wheat linguini and added it to a sauté of EVOO, garlic, onions, mushrooms, sun-dried tomatoes, greens, and Brussels sprouts.  Yup, Brussels sprouts in pasta.  It was a first for me and it was very good.  Earlier in the week she had picked up a couple of bottles of Barefoot Moscato at the store, one white and the other red, so I opened the red.  It was sweet, of course, but we both liked it and thought it went well with the pasta which was all savory ingredients.

After dinner I returned to my office and finally connected the new Sony SLT-A99V camera to my computer and transferred images to my laptop as I had set out to do this morning.  After completing the transfer I formatted both cards, changed the file system to create daily date folders, and set the USB transfer mode to Mass Storage.  I registered the body, vertical grip, batteries, battery charger, and SD memory cards along with the old Sony alpha 100 body and lens (DSLR-A100K) and then created entries in our password program with all of the relevant details.

The packaging for the SD cards indicated that there were two free software programs available to support the cards so I went to the referenced website.  One program was Memory Card Data Recovery and the other was X-Pict Story.  The purpose of the data recovery program is self-evident.  X-Pict Story is used to create slide shows.

Both programs required proof that I had qualifying media in the form of model and serial numbers in order to even download them.  I got the packaging for one of the SDXC UHS-1 memory cards and looked it over very carefully but could find either piece of information.  I took the cards out of the camera but could not see any identifying information on them.  I got my magnifying lens hood and with that extreme magnification I was able to just make out a model number (SF-64UY) on one side and 8-digit serial number on the other.

As long as I was in front of my computer I checked into RVillage and went through a dozen and a half notifications and “liked” or commented on a few.  There was an Ambassadors virtual meeting today 2 PM PDT (5 PM EDT but we were busy.  There is another one on Saturday at 10 AM PDT (1 PM EDT) and we will try to arrange our day so we can participate.

I spent some more time researching harness systems for holding cameras in front of me.  I think the 2-camera harness from Cotton Carriers may be just what I am looking for.  I was having trouble navigating their website using my iPad2 so I will look at their products more closely on the computer tomorrow.  I will also investigate whether I can order their products through Amazon or be better off ordering directly from the company.

Linda stayed up reading past 11:30 PM which is unusual for her.  I finished this post just after midnight but will look it over again in the morning before e-mailing it to myself.  Lights out; big day tomorrow with lots to try and get done.