Today was another major tourist day for us.  Our focus was on the central Black Hills area of South Dakota.  The weather was very agreeable, and just driving around would have been sufficient activity, but there were places to go and things we wanted to see. 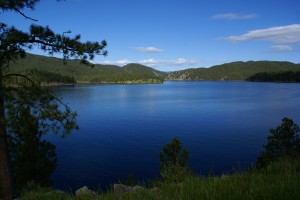 The first thing we encountered was Pactola Reservoir.  It was very picturesque, so we took a lot of pictures.  There was a nice visitor’s center that provided the usual explanations of the history of the area and the construction of the dam.  We stamped our “passport.”

Our first major destination was Mt. Rushmore National Park, and we wanted to get there while the morning light was still on the mountain.  On our way there on US-385, we came across the Prairie Berry Winery.  We had seen signs for their Red Ass Rhubarb Wine on billboards driving across I-90 and wanted to visit the winery anyway, so we stopped.  (The label features a redish colored donkey.) 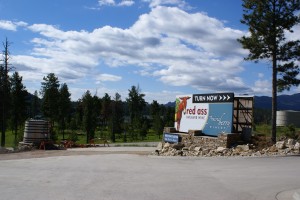 They didn’t open until 10 AM, but when a tour bus pulled up at 9:45 they opened the doors.  Given the hour, and the amount of mountain driving in front of us, we decided to buy without tasting.  This is usually not a good idea, but seemed like the prudent thing to do in this case.  We purchased a bottle of the Red Ass Rhubarb and a bottle of their Lawrence Elk Black Currant wine.  Linda likes red (grape) wines, but I am not a big fan of them.  I find most of them too dry and they create an unpleasant sensation in my mouth, as if it had been stuffed full of cotton balls by a dentist.  I like my wines on the sweet side, and beyond Rieslings and a few reds, like the 2009 Egri Merlot (from Hungary), I tend to like non-grape fruit wines such as pear or cherry port (excellent examples of both of which come from the Leelanau and Old Mission Peninsula region of NW lower Michigan).  The wines at Prairie Berry were not inexpensive, and they had won lots of awards (of course, what wine hasn’t).  I will report on whether or not these were good purchases in some future post after we have consumed them. 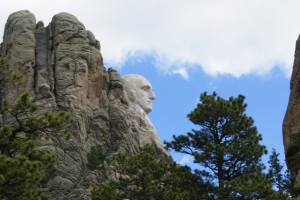 When we got to Mt. Rushmore N. P, our Senior Access pass got us in for no charge.  The parking, however, was not covered by the Senior Access pass and was not free.  It was also not suitable for tall vehicles, although they did have a lot with spots for RVs.  Our Element is not any taller than any other SUV, except when we have the Diamond SG-7900 dual band ham radio antenna on the roof, in which case we are over 10 ft to the tip of the antenna.  Fortunately traffic coming in to the parking structures was bumper-to-bumper (stopped), and I was able to hop out and quickly unscrew the antenna from its mount and put it in the back of the car before we had to enter the garage.  We got our passport stamped as soon as we were parked and had walked through the front entrance arrived (we always try to remember to do that first). 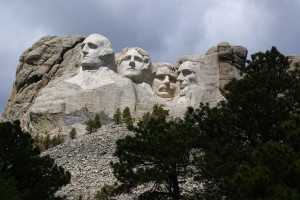 Mt. Rushmore N. P. is a truly iconic American destination.  If you think it is going to be corny, all I can tell you is that it is not.  There were a lot of people there, but it didn’t feel crowded, and we had no problem viewing the mountain from many vantage points.  The place makes you thoughtful, and you could spend a long time there just looking at the mountain and thinking about what it represents and what it took to create.  There is quite a bit of hiking available, but we opted for a short hike to the sculptors’ studio where the working model of the carving is housed along with other explanatory exhibits.  You can hike up close to the carving, but they warn you that it is steep, strenuous hike.  We had not allotted time for that, and were not wearing our hiking boots, so that experience will wait for some future visit.

There are two “drives” through the Black Hills around Mr. Rushmore that are almost as iconic as the mountain itself; the Iron Mountain Highway and the Needles Highway.  We took the Iron Mountain route from Mt. Rushmore to get to Custer State Park.  This road is narrow and winding.  Instead of switchbacks it has “pigtails” in several places.  These are places where the road makes a 270 degree turn while climbing (or descending) to cross back over (under) itself.  There were also several tunnels, some of which were only 8-9 feet wide and 10 feet tall.  This is definitely not a road for oversized vehicles!  Along the way we discovered the Spokane Creek Cabins & Campground (24631 Iron Mtn. Rd.)  It’s a wonderful little place by a creek at a bend in the road at the bottom of a hill.  It was lunch time, and they had a small restaurant, so we stopped for lunch.  We had a couple of simple side salads and had them make us a vegan pizza.  This is always an iffy proposition, and often does not turn out well, but the one they made was excellent.  The woman running the kitchen was assisted by her 10 year old daughter (my best guess) who brought us our food and checked on us periodically.  She was very attentive, and absolutely delightful. 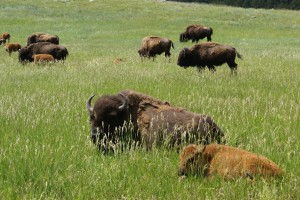 From there we went on to Custer State Park and took Wildlife loop.  This is a very large, very nice State Park.  Besides wonderful scenery, it has about 1,500 resident Bison (American Buffalo).  They are not all in one herd, but at French Creek we encountered a sizable group (hundreds of animals) with many near or on the road.  Traffic was at a complete stop for 20 minutes while Bison wandered across or along the road, or just stopped and starred at all of us in cars.  One of them walked up to the first car in line coming the other direction and used the front and hood as a scratching post while the front seat passenger clicked away with her camera through the windshield.  We were eventually first in line going the other direction when a large animal decided to walk up our lane.  So we followed him (it was definitely a him.)  He would stop every 10 feet and look over his shoulder at us, and then keep on walking.  Eventually he left the pavement and we were able to continue on our way, but we were at this location for about 30 minutes and got a long, close up, view of these very large animals.

When we complete our drive through Custer State Park, we drove the Needles Highway en-route to the Chief Crazy Horse Monument.  The road itself was not as dramatic as the Iron Mountain Highway, but the views and rock formations were stunning, especially as the good weather continued for us.  The Needles is an actual mountain and it here that finally saw Bighorn Sheep (a mom and two young) on a very steep distant slope.  A trio of motorcyclists stopped and one of them had good binoculars and first spotted the sheep.  He let everyone there have a turn using them, which was very gracious.  We had seen these guys off and on all day and asked where they were from.  Boston.  They were all riding “Harley’s”, but they weren’t what you think of as “bikers.”  We saw a lot of folks on motorcycles in the Black Hills, and if you’ve driven the roads, you understand why. 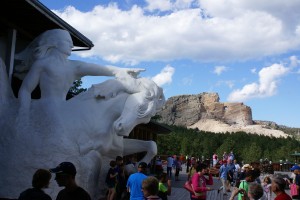 Our final tourist destination for the day was the Chief Crazy Horse Monument.  This is a private project on private land and there is a $20 entrance fee per vehicle.  Having driven all that way, we paid and went in, only to find out that you cannot get very close to the mountain/carving.  However, for another $4/person you can ride the bus up to a viewing point.  We decided the views from the visitor center were good enough.  My reaction to this place was mixed.  First, that it was both appropriate and necessary that such a monument should be created.  Second, however, was that it is a very, even overly, ambitious project.  It was very incomplete at this point in time in spite of decades of work, and it seemed unlikely to be finished in our grand-daughter’s lifetime (she was only 26 weeks old on this date), or perhaps even in her children’s lifetime.  The plans included much more than the mountain carving, including a hospital, university, airport, museum, and many other developments.  Whether such a project can be sustained with private funding and ever completed seemed to be a huge question mark for me, and the thought of it not ever being finished was sad.  Our Native American (first peoples) deserve this monument in its completed form, and I hope they get it someday.

By the time we were done at the Chief Crazy Horse Monument it had been a long day.  We still had a bit of drive to get back to our coach, and headed for “home” having taken hundreds of photographs (digital makes is sooo easy!).