The overnight low temperature hit 33 degrees F; probably not a record for this location and date, but still unseasonably cold.  There are plenty of attendees at this Escapade who are from more southern parts of the country, and they find this cold snap particularly unpleasant.  We brought a range of clothing options so we have been able to layer our garments as needed.

Today is the last day of the Escapade.  For many participants there is a feeling of things winding down.  The vendors closed up at 3 PM yesterday.  Some left last evening and others pulled out today.  There were morning seminars, but not as many.  People are tired after a long, busy week, and the dreary, cold, damp weather has caused some folks to huddle in their rigs. 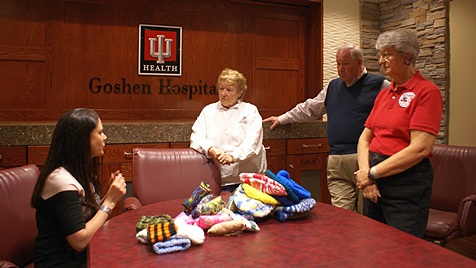 The experience is different for the Escapade staff that is busy bringing Escapade to a safe and successful conclusion and preparing for the post-rally tear down and wrap-up.  Even after you have landed a plane on a runway there is work to do taxiing back to the parking spot and tying it down.  There is a technique to taxiing a small plane, and if you don’t do it correctly an unexpected cross-wind can flip the plane over; so too with a big rally.  The muddy infield situation, for instance, has added work for them.  It’s always something. 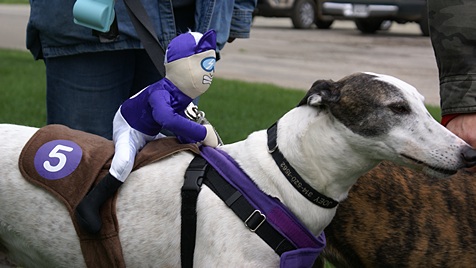 This greyhound at the pet parade had a jockey!  Such a sweet dog.

The fairgrounds appears to have finished spreading gravel around the worst part of the infield along the makeshift route leading to the place where we all have to cross the horse track and exit through the gate in the track perimeter fence.  It still feels very soft under our car tires, so it remains to be seen whether the repairs will be adequate to get the 100 or so RVs that are parked here out of the infield over the course of Sunday, Monday, and Tuesday.  Our hope is that heavy vehicles driving on the gravel will pack it down.  Our fear is that the loose gravel will simply cause our drive tires to spin and our steer tires to plow. 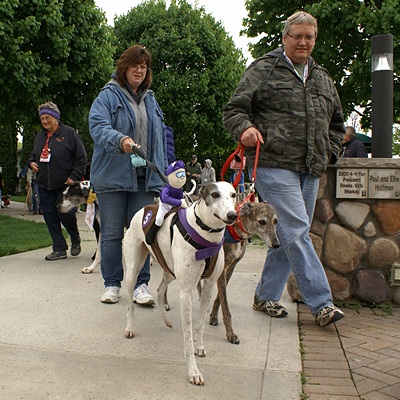 I took pictures of every dog in the parade, but these greyhounds really captured my attention.

I drove over to the seminar building around 8:45 AM and Linda stayed in our rig.  I took a few shots of Lou’s photography seminar and then moved the car over by Lou and Val’s 5th Wheel.  (They are parked in a particularly convenient place with room for an extra car.)  I grabbed some coffee and joined Curtis (from RVillage) for a brief chat before walking over to the Escapade office at 10 AM to meet up with the ladies who were taking donated craft items to the local hospital.  Lou was going to be tied up following his morning seminar putting together the final slide show for the closing ceremonies at 3:00 PM and asked me to cover the hospital event as we wanted to include a photo in the final slide show and Kathy Carr, Escapees RV Club president, wanted them for future use. 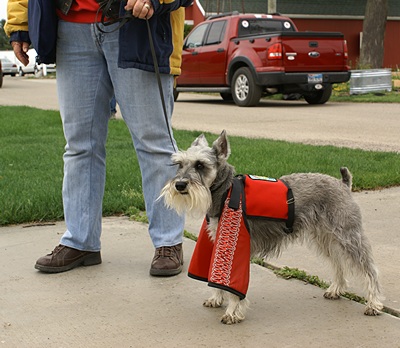 This “Scotty” was dressed for the parade.

When I got back I went to Lou’s trailer, I gave him the CF card from the hospital shoot and got back the CF card I had left with Val last night.  I photographed the Pet Parade at 11:15 AM and then joined Linda at the SKP Amateur Radio BOF brown bag lunch.  We stayed as long as we could and then headed next door to photograph the Chili Cookoff.  With that activity captured we returned to Lou and Val’s 5th Wheel, transferred the new photos, and got my CF cards back.  We then headed back to our coach. 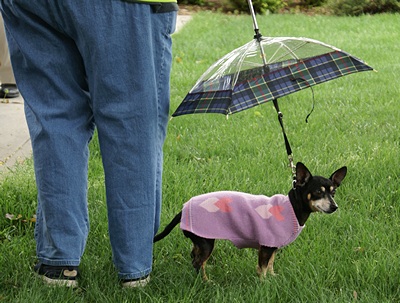 It was cold and drizzly, so I guess this makes sense, at least for a small dog.

Michele Henry of Phoenix Paint had called me while I was taking photos at the hospital to let me know she was on her way to the fairgrounds.  I texted her when we got back to our coach and a little while later she pulled up with her kids, Raven and River.  Both of the kids know me from the time I spent at Michelle’s shop working on my own projects while her crew prepped and painted our motorcoach a few years ago.  We had a nice visit and Michelle took a few minutes to look at our rear bumper fascia.  All too soon we had to head over to the closing ceremonies so they took their leave of us.

We had a Golden Retriever that lived to be almost 15 years old. They will always be our favorite dog breed.  So gentle and loving, everyone is their new best friend.

We wanted to get to the Assembly Hall early so we could see the slide show.  Once again, Lou used a good selection of photographs that I took and did a nice job of manipulating them to improve their appearance.  Just before the opening ceremonies we received our Escapade Volunteer Pins and two tickets for the volunteer prize drawing.  Lou and I met briefly with Bob Pinner to coordinate what needed to be photographed, who was going to do what, and from what perspective.  Following the closing ceremonies we photographed the grand prize winners and sponsors and then headed over to the Escapade office to photograph the Chili Cook-Off winner in her prize apron.  We went back to Lou’s trailer to transfer a final set of images and we were officially done photographing the 54th Escapade.

There were some post-closing activities, however, and we attended the Chapter 46 Lincolnland (Illinois) social at 4PM with Lou and Val, who are members.  A couple of other groups were also meeting at 4:30 PM.  At 7:00 PM Johnny Cockrum provided the music for a farewell dance/party.  Snacks were provided, BYOB, but we did not go.  The temperatures dropped as the sunlight faded and by the time we finished dinner we did not feel like going back out in the cold.  I had requests from a couple of people for photos and took care of those via e-mail and Dropbox before going to bed.