I was up a bit later last night, but managed to get the blog posts for the 17th and 18th uploaded and published.  As a result, I slept in until 7 AM, and Linda was actually up before me.  We had coffee and some fresh fruit, but held off on anything else to eat as we planned to go the Cold Hollow Cider Mill for their apple cider and cider donuts and some hot apple cider.

Linda checked the vegan restaurant in Burlington (Revolution Kitchen).  They were closed M-Tu-W, and are only open for dinner, so our first opportunity to dine there would be Thursday evening.  I spent some time searching for wineries near us, and the best option I could find was the (Snow Farm Vineyard and Winery.) in South Hero on Grand Isle, an island in Lake Champlain between Burlington, VT and Plattsburg, NY.  It was only 52 miles away, and it was actually open every day starting at 11 AM.  We made a tentative plan to go there on Thursday and then go to dinner in Burlington.  Most of the wineries in the area were closed during the week and re-opened on Thursday for the weekend.  Some appeared to be closed for the season, which seemed very odd to us as the fall color show has yet to really begin. 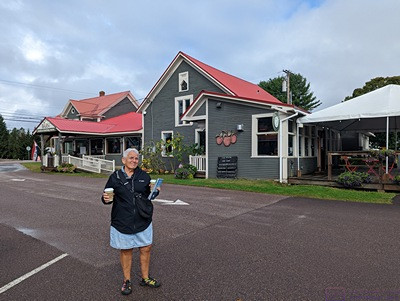 Linda in front of The Barn at Cold Hollow Cider Mill.  The Barn is actually the cidery (hard cider) tasting room and café.  We did not go in on this visit.

Our first stop was the Cold Hollow Cider Mill.  We got six of their ‘legendary’ cider donuts (cake style) and two small apple ciders for $8 + tax.  The hot (or cold) cider was unlimited refills, so we took advantage of the bargain.  Both products were fresh and tasty, as there were a lot of people there and they move a lot product.

As long as we were going out to get cider and donuts for breakfast, we decided to do a little grocery shopping.  Our next stop was the Farmers Market, at little closer towards Waterbury.  It was a small grocery with a mix of fresh and processed items.  We just looked around, as we were also headed to the Shaw’s supermarket farther in towards Waterbury.

At the Shaw’s location, there was also a True Value Hardware Store.  I needed an adjustable wrench or pliers to keep with the water system components, so I went in search of one.  I ended up buying a Vise-Grip channel lock pliers.  Not too large, but with adjustable jaws that could open wide and lock shut.  Perfect. 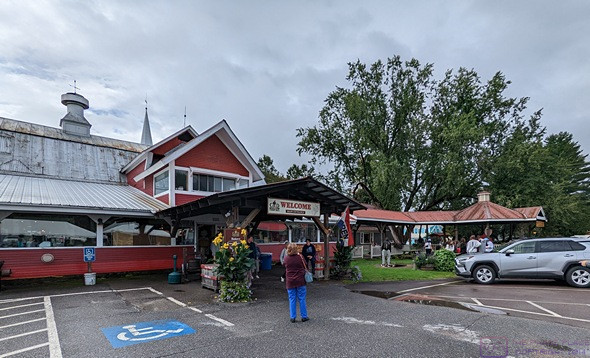 This is the Cider Mill and Donut Shop building.  It also housed a gift shop and bakery.  An alcove with windows allowed us to view the pressing of the apple mash to extract the cider.  A sign said the spent mash was used to feed pigs.

When I rejoined Linda in the supermarket, she was almost done shopping.  We checked out and headed back towards camp.  We were near the Ben & Jerry’s factory at this point, so she checked online about tours; reservations required and they had to be made online.  No reservation needed if you just want to visit the “graveyard” (of retired flavors) and by ice cream at their shop.  But we were not done yet.  We stopped at the Farmers Market again, and Linda bought some mushrooms for tonight’s dinner.  But we still had one last stop to make before getting back to our trailer; the Lake Champlain Chocolate factory outlet store.  We were only out for a couple of hours, but accomplished what we had planned to do, and the rain had held off during that time, so it worked out well.

Back at the trailer, we had hummus and Fritos as a quick, easy lunch/snack.  Perhaps due to the dreary weather, we both decided to take naps during the afternoon.  After my nap I continued working on a Multi-Sudoku ‘combo’ puzzle I had started earlier.

For dinner, Linda made a pasta dish with Garofalo Lumachine pasta, mushrooms, onions, greens, and vegan meatballs in arrabbiata sauce.  We had a few pieces of the chocolate we bought earlier today.

Now that we had access to TV signals, and the new season has started on CBS, we spent the remainder of the evening watching the three FBI shows.  Linda headed off to bed as soon as they were done, and the cat followed her, as she does every evening.  I stayed up long enough to post the blog entries for yesterday and today.