We did not have to be up early today, so we slept in a bit.  We had our usual morning coffee when we finally got up, but did not have breakfast.  Our plan for today was to drive to North Conway, New Hampshire.  We had two destinations in mind; Valley Vegan (café and bakery) and the White Mountain Winery tasting room.  The winery was our original reason for going.  With Sunday hours from noon to 4 PM, Linda checked Happy Cow to see if we could also find somewhere to eat.  She found Valley Vegan, and one other place that had a few vegan options.  Valley Vegan was open from 9 AM to 3 PM, and had breakfast and lunch items in addition to bakery items.  Our plan morphed into going to Valley Vegan at 11 AM for breakfast and then going to the winery.

We left around 10 AM and had an easy drive down NH-16 from Gorham through a long, winding river valley with the Presidential Range on our right/west side.  The road was in fabulous condition, was posted 50 or 55 mph most of the way, and traffic was light, so it was a fun drive as well.  It was overcast, the distant views were misty, and some of the mountain tops were shrouded in clouds, but that sort of weather just shows the mountains in a different, mysterious light. 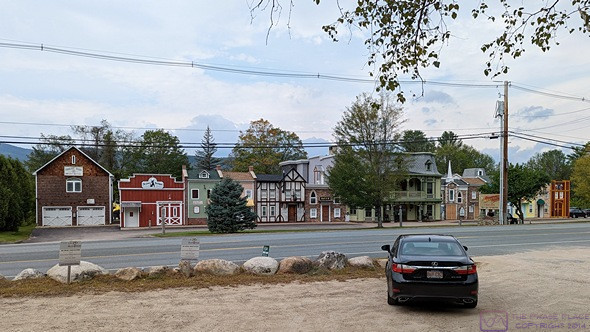 Across the street from the Valley Vegan was this Adventure Suites Hotel.  Linda looked it up online and that it was (or claimed to be) one of the top 10 “themed” hotels in the U.S.  More than just a cute front façade, every guest suite was decorated in a different theme.  On our drive down to North Conway, we passed the Storyland Amusement Park.  It was quite a place from what we could see.  Based on the number of vehicles in the very large parking lot, we guessed that there had to be at least a thousand people there, maybe double that number (or more).

We arrived at Valley Vegan, on the north end of Main Street (NH-16), a little before 11 AM.  The only person working there was the owner, and he was busy.  It was a carry-out place (we knew that before we arrived), with a few picnic tables outside.  It was also a “new age” shop with crystals, stones, and other such things.  Fun to look at, but we were there for the food.  Several orders were already in the queue when we placed our breakfast order; oat flour waffle with chaga maple syrup for me, and a breakfast sandwich for Linda (just egg patty and sausage patty on an English muffin).  We also got two triple-berry scones and four flaky cinnamon twist sticks “to go.”  We sat outside and ate two of the sticks while we waited for our main dishes, which took about 30 minutes to get.  The sticks were very good and so were our meals.  A bit overpriced, in our opinion, but we did not mind supporting a small, all vegan (and partially gluten-free) business. 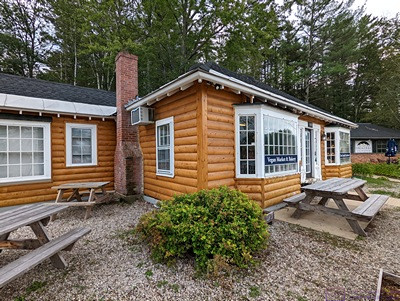 The Valley Vegan café and bakery with The Original Cigar& Bar behind to the right.

We finished our breakfast at noon and then drove into the main area of North Conway.  It was an unapologetically upscale tourist town, chocked with vehicles and with lots of people on the sidewalks and in the shops.  We lucked out, and got an angled parking space on the street not far from where the winery was supposed to be.  We did not see it on Main Street and figured it must be around back somewhere.

It was, and it was definitely a tasting room in a city, as we saw no evidence of the actual wine production.  They had a bewildering variety of offerings—reds, whites, and fruit “flavored”—all bearing their label.  I told the lady behind the counter that we were looking an actual blueberry wine and was informed that all of their offerings were made from grapes; the fruit (flavored) wines were infused.  We’ve had less expensive versions of this approach to wine, and they were terrible so, no thanks.  (The exception would be Sangria and mulled wines.)

Since we were there, we spent a little time looking at what they had.  I spotted a Caménère, which I had never seen or heard of before.  Linda looked it up online, and found that it was a grape variety originally from Bordeaux, France but now mostly associated with Chile, although it is also grown in Italy, California, and Washington State.  What that said to me was, these grapes did not come from anywhere near here, (and maybe the wine didn’t either).  In any event, we were both turned off by the large number of fruit infused wines on offer.  Indeed, the labels said “natural fruit flavor,” whatever that meant.  We left without tasting or buying anything and returned to our truck by way of the front entrance, which was on a small courtyard connected to the street by a small pedestrian alley.

Linda checked their website again on the drive back, and it indicated that they ”made” all of their wines, so I guess we have to take their word for that.  We were in agreement, however, that we like tasting rooms that are part of the actual winery, especially ones where we can see the tanks, or tour the building where they located.  Even better, is when we can see the vineyards where the grapes came from to make the wine we are tasting.  (All of our favorite wineries in Michigan’s Leelanau and Old Mission Peninsulas meet those criteria.)

Rain was in the forecast for Shelburne starting mid-afternoon, with the percentage chance jumping from 17% at 2 PM to 47% at 3 PM, and going up from there.  Once it started, the chance remained high through the night and into tomorrow morning.  That left us with the choice of possibly breaking camp in the rain tomorrow morning, or getting some of that done today before the rain started, and operating off our fresh water tank and pump.  We had encountered this situation several times already on this trip, and opted every time to partially break camp ahead of time.  Our choice was the same today, which required us to be back in camp not later than 2 PM.

When we got back to US-2 in Gorham, we headed west towards the Walmart.  Linda wanted to get some more paper towels, and a couple of inexpensive bath towels to put on the rug in the trailer when we stored the shorepower cord there for travel.  Before getting there, Linda spotted the Dollar Store and I pulled in.  As a bonus, the NH Liquor & Wine Outlet store was in the same building.  I went there to see if they might have the Black Tower Rivaner that we discovered at the Masstown Market in Nova Scotia.  They had a lot of different wines, but only four from Germany, all of them Rieslings.  They did, however, have two Taylor Fladgate Tawny Ports, a 10-Year-Old ($23) and a 20-Year-Old ($42).  I opted for the 10-Year-Old.  Taylor Fladgate is Portuguese and has been making port since 1692.  They also make a 30-Year-Old and a 40-Year-Old, with prices to match.

On the way back to the campground, I pulled in to the Irving fuel station and topped up the tank.  On the short drive back from there, the fuel economy calculation reached 29.9 MPG.  That was as close to 30 MPG as it has ever been.  The slightest uphill grade, however, and it dropped back down, but was still above 28 MPG when we pulled in at 1:30 PM.

We had driven through rain coming up NH-16, but it had not yet reached Gorham or Shelburne.  I got busy with my outside tasks, and enjoyed not having to rush or do them in the rain.  Linda cleaned the interior and mopped the floor while I worked outside.  I dumped the black and grey waste tanks, put the sewer hose back in the storage compartment in the rear bumper of the trailer, and put the hose support accordion back in the front storage compartment of the trailer.  I then disconnected all of the fresh water components, drained them and stowed them for travel in their designated places.

I removed the covers from the hitch and WD jacks, put those away, and then put the stinger back in the truck receiver.  I backed the truck up to the trailer and had to make 2 or 3 minor adjustments to get the stinger lined up with the hitch.  (It usually takes me quite a few more adjustments.)  At that point, I had done everything I could until we were ready to hitch up in the morning and leave.

I was still intrigued by the Caménère grape wine we saw at White Mountain Winery, so I did a bit more research online.  One wine review website described it as having a distinctive taste, but went on to mention “smooth tannins” (no thanks to tannin) and “green pepper” (yuck).  (I like bell pepper, but not the green ones.)  Another wine review website said it had found a particularly good home in Chile, and was poised to surpass Merlot as Chile’s number one wine.

I spent the rest of the afternoon working on blog posts.  The first rain drops came about 4:30 PM, but were light and did not persist.  Linda planned dinner for 6:30 PM so I stopped at 6 PM, and put my computer aside.  Dinner was a green salad, baked potato, and Gardein Stuffed Turkey roll (vegan, of course).  We finished the Ménage à Trois Midnight red wine blend with the meal and had a few cookies for dessert.  The rest of the evening, Linda read and I worked puzzles, as I wanted to take a break from working on the blog.  And that was our day.