We were both up just before 7 AM.  I switched the zone 2 controller from heat-pump to furnace.  The heat pump was dropping the voltage from 118-119 to 108-109; not ideal, but it ran all night (off and on) without the Hughes Power Watchdog disconnecting the trailer from the shorepower.

We did not have any specific plans for today so we used our iPads and were not in a rush to have breakfast.  When we got around to eating, we had bagels and fresh fruit (bananas, blueberries, and strawberries).

Linda really wanted to ride the cog train to the top of Mt. Washington and re-checked the weather forecast.  Today was still a “no go” but the forecast for Saturday now looked promising.  She got online and made reservations for tomorrow on the 1:00 PM bio-diesel cog train at Mt. Washington.  (The steam train was sold out.) 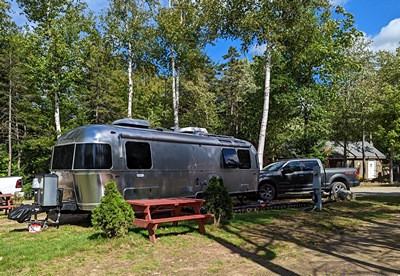 Our rig in site 18 at Timberland Campground in Shelburne, New Hampshire.

Scott came over and I went out to meet him.  He pointed out that the 50A electrical outlet was in the meter box.  Duh.  (Sometimes it feels like my parents wasted their money on my EE education.)  We had a nice chat; he was a former boat mechanic with a lot of electrical experience.  He and Megan just bought the campground this past May, and plan to be open for approximately 5 months every year; mid-May to Columbus Day (October).  The wiring to our site, and the one on either side of us, was new/upgraded and he said voltage drop should not be a problem.  (I later confirmed that this was, indeed, the case.)

I learned a few interesting things.  The campground was built starting in 1970 and opened for business in 1972.  All utilities were buried, but the tree roots are starting to push them close to the surface, which is a problem, especially for tent stakes.  The increasing demand for 50A electrical is also problematic for them, and will require some effort and expense to address.  He said the previous owners also did not keep up with tree maintenance, so they have quite a bit of work ahead of them in that department as well.  Megan runs the “front of the house” and Scott takes care of the “back of the house.”  They are experienced campers, whose camping aesthetic does not require 50A power (or any shore hookups at all).

Our driver-side next-door neighbor was out preparing their rig for departure, and he joined the conversation for a few minutes.  They are headed to the Bar Harbor KOA.  Our best guess was that they are headed south after that, as it starting to get cold here at night, and they have yet to visit the Southeast U.S. 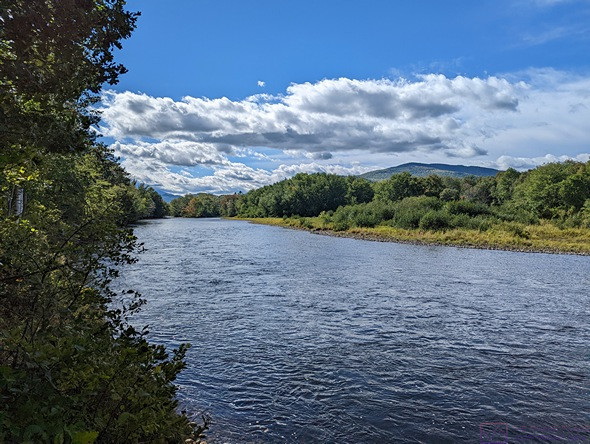 Timberland Campground is an interesting piece of property.  It lies between US-2 and the Androscoggin River, but an active train line runs through the park lengthwise.  About 35% of the campground is on the other side of the tracks, and fronts the river.  The River Walk (trail) winds through that section and we took a break in the afternoon to check it out.  Scott had mentioned that there was bear scat on the trail from last night, and it was pretty obvious when we got to it.

Linda decided she wanted to get a haircut, and her online searched turned up a salon at the local Walmart.  So, our big plan for the day was to drive the ~3 miles to Gorham, NH and take care of that.  She called to see if she needed an appointment, and was told there was presently a 5-minute wake for walk-in.  We made quick to depart, and were on our way to town.

Linda was happy with her haircut, after which we did a little grocery shopping.  We pickup up two bottles of wine, nothing special by brands and style we like (Ménage à Trois Midnight Dark Red Blend and Barefoot Riesling).  (The red one went in the refrigerator when we got back to camp, to chill down for later.)

The Androscoggin River as seen from the Timberland Campground River Walk (trail).  We were surprised by how fast the water was moving.

We thought we might do some sight-seeing, but with fresh and frozen food in the truck, we decided to return to camp and didn’t feel like just driving around anyway.  Linda had looked for wineries in the area last night, but didn’t find any nearby.  (We would really like to find a bottle of blueberry wine, and should have bought one while we were in Bar Harbor, Maine.)  We searched again this morning, and found that the closest winery was in North Conroy, about 40 minutes south of Gorham on NH-16.  Their website said they had “fruit wines” (not made from grapes).  And there were open on Sunday, noon to 4 PM.  Linda also found two vegan café/bakeries!!!  One of them was open 9AM –  3 PM on Sunday and served breakfast.  Bonus!  The weather forecast for Sunday was favorable, so a trip to North Conroy on Sunday for breakfast and wine was the plan. 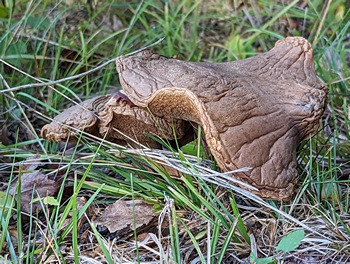 We found this very unusual looking mushroom along the River Walk.  Google Lens could not identify it.

Mid-afternoon, we explored the River Walk (and found the bear scat Scott had told me about this morning).  The campground starts at the level of US-2 and drops slightly towards the River.  Behind the last, long row of sites, the terrain drops off sharply and then flattens out for the train tracks before dropping off again to get down to the flats by the River.  The area by the River is where most of the River Walk is located.

The rest of the afternoon I worked on the blog and Linda read.  It was beautiful, but chilly outside, and we were content to stay at home and stay warm.  The 50A electric service was a winner; maintaining 119 Volts AC or better with the larger heat pump running and the electric element for the water heater turned on.  We enjoyed a cup of tea and didn’t have to manage our power in order to use the kettle to boil the water.  I guess that meant we were “glamping” (glamor camping), but to us it’s just the way we camp these days.

Dinner was baked potatoes with all the (usual) fix’ins of sauteed vegetables, vegan cheese and sour cream.  We each had a small glass of the Ménage à Trois Midnight Dark Red Blend with dinner.  We had Oreo cookies later for dessert.

The forecasted low temperature for tonight in Shelburne was 40 (F), with a Frost Advisory from 0200 to 0800 Saturday morning, so we were glad to have the 50A electric service as the zone 2 heat-pump was going to run quite a bit overnight.

By 11 PM, I was ready to upload the blog posts for the previous days and appeared to have a robust enough Internet connection to get it done efficiently.  I had them both published by 11:35 PM and turned in for the night.