The weather forecast for today had snow moving into the area starting at 4 AM, increasing in intensity by 8 AM, and continuing through the day and into the evening.  The initial forecast was that we would get 4 – 6 inches of accumulation with temperatures hovering just below freezing.  We overslept this morning and did not get up until 7:30 AM but decided to go to our weekly ham radio club breakfast in South Lyon anyway.  I have had Mike’s (W8XH) climbing harness for a while and wanted to return it before we left for the winter.

There was already some accumulation on grassy areas when we left at 7:45 AM but the drive was not a problem and we arrived at 8:10.  We were the last ones there, of course, but someone had to be.  We had a nice chat with Harvey (AC8NO) and Diane, who are usually close to the last to arrive.  I called Mike, who did not make it to breakfast, and let him know I was transferring the harness to Harvey.

On the drive home we stopped at Meijer’s in Brighton so Linda could get some additional ingredients to make more granola.  By the time we got home at 10:30 the snow was starting to pile up.  I had four text messages from Kristine Gullen in quick succession which turned out to be four parts of one message.  She wanted to pin down our dinner plans for this evening.  I texted her back once I got home and after a couple of exchanges we came to the mutual conclusion that the weather was going to interfere with our get-together.  Sadly, that meant we would not see her and Jim again until May 2016 as they were probably headed to Frankenmuth for the Fall MERA conference and then on north to their cottage at Crystal Mountain for the Thanksgiving holiday. 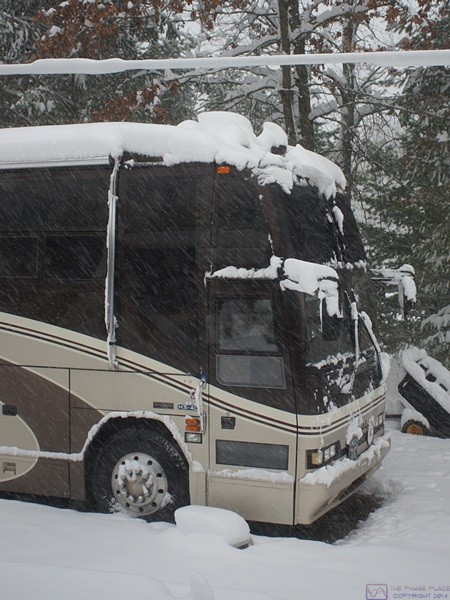 Snow piling up around the bus less than a week before our planned departure for Florida.

Our original plan for today was to clean the inside of the motorcoach and then start cleaning up the garage/shop.  With the snow piling up we decided to defer cleaning the rig and concentrate on cleaning up the garage and staging things that we will eventually load on board.  I worked in the garage most of the day although that included moving things into the library and house.  Linda concentrated on making granola, preparing a billing statement for the bakery, and organizing/staging kitchen-related things for the bus.  She also came out and helped me when I needed assistance.

My objective for today was to get one of the temporary workbenches cleared off and disassembled.  I also wanted to get all of unused plywood stored flat.  By 5:30 PM we had accomplished those two goals, gotten most of the power tools put away, moved quite a few things to the library, and stored or thrown away quite a few other things.  I had also managed to strain my lower right back.  That is never a good thing, but it was especially bad given what we have to accomplish in the next three to four days.  We will continue the process tomorrow and I will try to get my tool boxes reorganized before I quit working for the day.  A critical piece of the cleanup will be getting everything that should be protected from freezing out of the garage and into the library as we do not heat the garage while we are away even though it has a furnace.  From there some of it may get moved to the laundry room in the basement, or not; it just depends on time and energy.

We need to clean up the garage enough to get the Honda Civic inside and also the (non-functioning) lawn tractor.  Optionally we can leave the tractor where it is and put a tarp over it or I can borrow Mike’s trailer and take it to Sloan’s in Linden to have it repaired and stored for the winter.  I like the last option best but I doubt that I will have the time to take it there before we leave.  It would have to be on Wednesday, assuming they are even open the day before Thanksgiving. 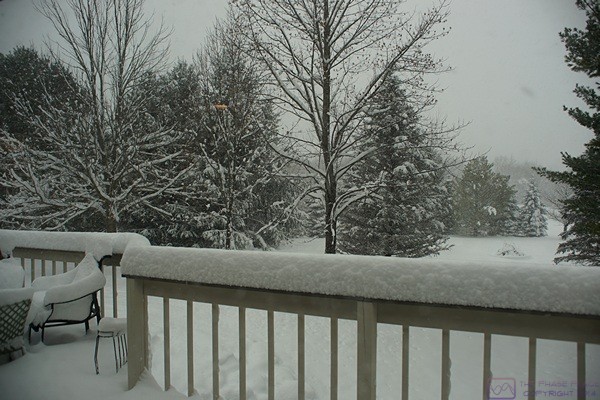 Snowstorm in progress. Lots of snow on the rear deck and still coming down.

For dinner, Linda sautéed an onion with some mushrooms and heated some frozen broccoli and peas.  She used all of that as toppings for two baked potatoes.  We watched the snow fall as we ate and estimated the accumulation on the railing of our rear deck to be at least a foot.

By 7 PM Howell had officially recorded 14.5 inches of snow and it was still coming down.  I decided to text Kerry Fear, who does our snowplowing, to let him know that I staked the driveway yesterday but we still have a mower deck, wheelbarrow, paving blocks, and plastic conduit in the northwest corner of the drive that we have not yet had a chance to remove.  He texted back that he was “up north” and would be back Sunday afternoon.

We went to bed before 9 PM, watched a few minutes of weather on TV, and caught a bit of a Cirque du Soleil holiday show on Detroit PBS.  I was going to call Butch and text Chuck but it was after 10 PM so I went to sleep instead.