For various reasons we have not worked on the bus the last two days.  For one, Linda is still recovering from a cold and/or seasonal allergies that may have been triggered by some weeding she did over the weekend.  August and September are the time of year for ragweed in Michigan.  For another, I was tied up most of Tuesday with the bus windshield replacement and yesterday we both had our annual physical exams, mine in the morning and Linda’s in the afternoon.  Throw in an unexpected problem with the driver door lock on my car and a lawn tractor that wouldn’t start and that took care of most of the day.  Since I wasn’t working on the bus I used some of my time to edit drafts of blog posts and started selecting and processing a few photos to go with them.

I got a call from Philip Jarrell around 8 PM last night letting me know that a last minute project came up that required his attention today.  If all goes well he plans to start on our French drain and driveway extension project tomorrow.  Our project is a relatively small job for Phil and I accept that he has to fit it in around larger projects for long-term customers who give him a lot of repeat business.  Still, I think he likes working with us and does his best to fit us in.

I had hoped to get back to work on the bus today, specifically working on priming the walls and hanging the new wallpaper, but Linda had another annual medical appointment this afternoon.  Neither of us likes to get into our work clothes and get involved in physical tasks for just a small portion of the day so after breakfast, and a leisurely morning in the living room enjoying coffee to the glow and warmth of our fireplace, she settled in to work at her desk for a while before going on a walk.

Our whole house generator threw a code 34 on Tuesday afternoon indicating that it required maintenance but would still operate if needed.  I called Bratcher Electric to see what was needed and spoke with Karen.  I think she and Mike own the business, but it’s possible she is Mike’s daughter.  Whichever, I’m certain that she is family.  Our generator was last serviced one year ago on the same date (29th) and the 34 was the total number of hours it has run since being installed in May 2013.  I set up the service appointment for Friday October 9th.

While I had Karen on the phone I asked about the project Mike had come out to look at a year ago.  I need his electricians to run a 4-wire, 100 Amp service entrance cable (SEC) from the transfer switch in the southwest corner of the garage, through the garage attic, and into the secondary distribution panel in the HVAC closet in the northeast corner of the garage, making it a main panel instead of subpanel.  Karen said she would leave a note for Mike to follow up with me.

It was going on noon when I finally got back to work on the bus.  It is a gorgeous fall day, chilly and breezy but with abundant sunshine, and I just could not let it slip away without getting something done on our interior remodeling project.  I was at least 60% done with rebuilding the landing where the stepwell slide cover used to be and that seemed like the logical thing to get finished.  It was 52 degrees F in the bus so I turned on the front electric toe-kick heater and set up the small Broan portable electric heater in the kitchen blowing forward towards the cockpit.  I also noticed that the refrigerator thermometer indicated 43.5 degrees F.  We do not have any food in the fridge but we do have freezer packs and containers of water for mass.  43.5 is warmer than I want so I checked the freezer reading and it was 28 degrees F.  Yikes!  That was way too warm. 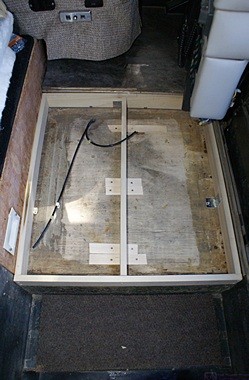 The 31″ X 27.5″ piece of 3/4″ thick plywood for the landing platform flexed slightly when I stepped in the middle.  I’m not sure anyone would notice it when stepping on it but we do not want the tile that will be on there to crack from the deflection.  My solution was to cut an appropriate length of the 2.5″ wide 3/4″ thick poplar and install it on edge running long ways to support the middle of the plywood.  I had to use an angle bracket at the back edge (by the driver’s seat) and place shins under it at several places to get it to fit just right.

About this time Linda came out to let me know lunch was ready.  We each had a half sandwich of hummus and raw onion on rye bread and some black grapes.  She left for her doctor’s appointment and I made a big cup of Constant Comment decaffeinated tea.  I called Chuck to see if he knew where his powered metal shears (nibbler) were and if I could borrow it.  The answers were ‘yes’ and ‘yes.’  I decided to take his suggestion of cutting two new access openings in the passenger side HVAC duct to allow the two existing heater hoses to come out and go directly to the fan-coil heat exchangers with minimal bending.  It will simplify the installation, eliminate soldered copper parts and connections that would restrict flow and be a potential leakage point.  Since my car is in the shop for the next several days I will have meet up with him when Linda’s car is available.

Back in the bus I checked the refrigerator and the fresh food compartment was at 39 degrees F and the freezer was At 6 degrees F.  Those are the sort of temperatures I expect to see.  I had the freezer set to cycle between about 0 and 10 but occasionally saw it go as high as 17.  I figured it had something to do with an automatic defrost cycle, but anything over 20 is troubling.  Linda had suggested earlier that perhaps we need to replace the batteries in the remote sensors and the base unit.  She may well be right and it won’t hurt to do that anyway.

When I got back to work on the landing I folded over the ends of the two air lines and put cable ties on them to close them off.  The air supply for the solenoid valve that controls these two lines has a shut off valve which I intend to keep closed, but if it gets opened accidentally it could drain the auxiliary air tank through one or the other line if they were not crimped closed.  I may eventually disconnect the supply line at the valve and cap it, but for now this will at least prevent an open line leak. 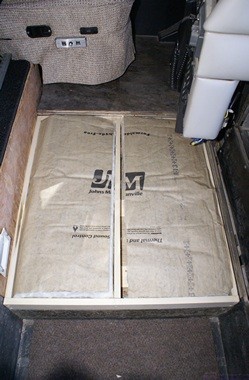 After screwing down and cutting off the shims I plugged the hole where the air lines come through the floor with steel wool and secured the lines to the floor with cable clamps.  I then cut fiberglass insulation to fit the two spaces in the floor.  I used the same John’s Manville Sound & Thermal insulation that we used in my office and ham shack as I had some left.  I put the plywood floor piece in place, evened it up along the front edge, and screwed it down but ran out of screws before I had it completely secured.  Projects are like that.

I was walking towards the garage when I saw a car coming very slowly from west of our house headed east.  The drive pulled past our third drive and stopped but I could not see what the driver was doing.  The car eventually continued on, followed closely by a second vehicle and I thought the flashed me a somewhat dirty look, but they did not stop and were too far away to be sue.  Still, I thought that was odd.  I did not give any further thought to it until I went out to get the mail and noticed a lot of debris in the road and a large, dead tree in the ditch.  It had been windy all morning and at one point I thought I heard the crack of a falling tree but it sounded farther away than where this one lay.  The driver had obviously stopped to move it and was probably a little bit annoyed that they had to do that because I had not taken care of it.  Hey, I didn’t know!

Linda stopped for groceries on the way back from her doctor appointment and did not get home until almost 4 PM.  We got a pruning saw and cutter and she helped me cut up some of the upper part of the tree and get the pieces farther from the road.  We noticed another dead tree in the same area that looked like it would eventually fall over across the road.  I can cut it down safely but will need the chain saw to do so.  I was not in the humor to get it out and try to get it started at that exact moment but noted to myself that I needed to do this sooner rather than later.

We were not going to start any messy bus work at that hour so I changed into nicer clothes to go out to dinner.  Before we left I texted Josh at Coach Supply Direct to clarify an earlier e-mail and let him know that two of the MCD shades were not staying attached to one of their clips.  We left at 5 PM for the La Marsa in Brighton and stopped at the bank on the way.  For dinner we split an order of Moussaka and got two salads as our sides along with the warm pocket bread and garlic spread.  The food was good and we had a tasty, filling meal for under $14 plus tip.  It is our best/favorite restaurant option within reasonable driving distance of our house.

After dinner we stopped at The Home Depot in Brighton but they did not have the screws I wanted.  When we came back out I noticed that the tires on Linda’s car were under-inflated and on closer inspection that the side walls were badly checked.  We drove to Discount Tire in Howell but they were closed.  We stopped at Lowe’s and bought the screws I needed, some furnace filter material, and Lithium batteries (AA and AAA) for our TempMinder base/remote thermometers as we keep the two remotes in the bus freezer and fresh food compartment and the base station on the bus kitchen counter.

Back at the house I worked in my office for a while selecting/processing photos to go with blog posts but I did not feel like putting in a long, sustained effort on the task.  I got a call from Phil at Precision Grading.  His other job did not get finished today and he will have to return to that job site tomorrow.  He hopes to start our French drain and driveway work on Monday but that may not happen.  I am anxious for him to get started but I have no control over that.  I appreciate, however, that he keeps me informed as it allows me to plan my own time.

We watched The Woodwright’s Shop, Rick Steves’ Europe, and Travel in the Americas on DPTV (WTVS) and then went to sleep.