We were up at 8 AM, had granola for breakfast, and enjoyed our coffee in the living room by the fireplace.  I like cool mornings.

I spent some time yesterday morning, and again this morning, considering my full-frame DSLR options.  The only 50 MP “35mm” DSLR camera body on the market at this time is the Canon 5Ds/R and there is no indication that Sony plans to introduce a successor to the A99 anytime soon.  The A99 is still available, as is the vertical battery pack/grip and I am at the point where I will probably order one.  It has a 24 MP full-frame CMOS sensor, which is double the resolution of my alpha 100.  More importantly, it will accept all of my old 35mm Minolta A-mount lenses and they will work as designed.

Linda left at 9:40 AM to meet Diane at Kensington Metropark.  I gathered up the laundry, sorted it, and started the first load.  I then settled in at my desk for a while.

I e-mailed Mike (W8XH) to see if he could assist me on Saturday and/or Monday with climbing the tower to do some more antenna work.  I then e-mailed Bill Gerrie to see if he and Karen were in Michigan yet.  I pulled up the initial mockup of the October 2015 issue of Bus Conversion Magazine and proofread my article on replacing the speedometer.  Jorge had done a good job of laying it out.  I e-mailed back four minor corrections, one slightly larger one, and a general comment about the lack of space following periods.  I had an e-mail from Steve Smith (N8AR) with contact information for Yaesu Fusion technical support.

The washing machine beeped so I transferred that load to the dryer and started another one.  I noticed that it was after 11:30 AM so I cleaned the cats’ litter tray, grabbed the garbage from under the kitchen island sink, put it in the trash can, and got it to the street.  Alchin’s normally comes “around noon” but I had a feeling they had already driven by.  They were still in our subdivision, however, and stopped on the way out to empty our can.

I had another cup of coffee and updated this post.  By noon Linda had not called yet let me know she was on her way home so I headed to Lowe’s for a roll of plumber’s sandpaper.  I also picked up the paste we need to hang the new wallpaper.  On the way back to the house I stopped at Teeko’s Coffee and Tea to order some Cafe Europe half-caff blend.  Linda was home when I got back and we had a light lunch.  We have both finally taken off some of the weight we put on this past winter.  Long, hard work days with little or no lunch seem to help.

By the time we got back to work on the bus projects it was 3 PM.  It’s hard to make progress when the workday starts in the afternoon.  Today is the autumnal equinox, so it gets dark much earlier in the evening than it did in late May, June, July and even most of August.  Still, as anxious as I am to get the heat exchangers re-installed we have to deal with the wallpaper in that part of the bus first.  Linda helped me assemble the right desk base, repeating what we did yesterday with the left base. 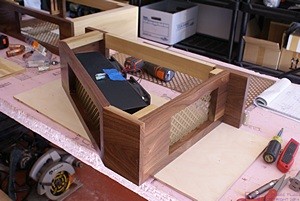 The left pedestal base with the Aqua-Hot fan-coil heat exchanger mounted inside.

We installed the metal grates on the air openings (from the inside) and then used doubled-sided tape to affix the plastic mesh to the metal grate.  We put a 1/2″ plywood spacer in the bottom and marked the locations of the mounting bracket holes and the heat exchanger.  We took the exchanger and spacer out, punched the starter holes, and drilled.  Linda cleaned the heat exchanger and used a pair of tweezers to straighten the bent radiator fins, of which there were quite a few.  We cleaned off the two copper pipe stubs that provide the inlet and outlet for the antifreeze and then attached the self-stick 3/8″ X 1/4″ dense foam weather-stripping around the front of the housing.  We mounted the exchanger to the spacer with approximately 1/8″ of the foam weather-stripping beyond the front edge of the spacer.  We put the spacer/exchanger assembly back in the base and I secured it with screws while Linda pulled it into position, compressing the weather-stripping. 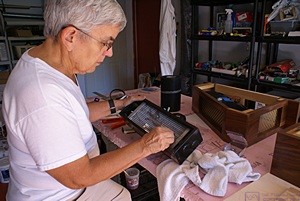 Linda cleans and straightens the fins on one of the fan-coil heat exchangers.

I took a few photographs as we worked and took some more of the finished assemblies.  While we were working we got a call from Philip Jarrell of Precision Paving.  Phil was calling to see if we still wanted the French Drain and driveway work done.  He has been busy all summer and even more so coming into fall when folks decide they need stuff done before winter.  He had given us a quote (estimate) back in the spring but could not do the work then because the soil was way too moist.  The property has dried out nicely over the last seven weeks and he wanted to make sure he did the work yet this year if we were still interested.  I told him “yes” and he said he would call “Miss Dig” right away to get the utilities marked and then get started. 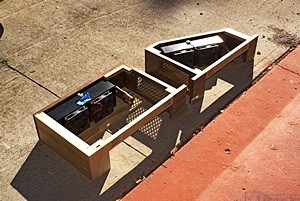 The two desk bases with the fan-coil heat exchangers installed view from above and behind.

I think this annoyed Linda as it will be another significant expenditure, but it’s something I think needs to be done and it is not easy to get a slice of Phil’s time.  (Actually, we have done a lot of difficult work together on the bus this summer and I think she was already annoyed from working with me on the right base.)  Not taking advantage of Phil’s availability would likely mean a two-year delay in getting this work done.

This project is actually a combination of two different projects that happened to make more sense to do at the same than at separate times.  The French drain is intended to dry out the far west end of our property which has standing water in the spring and after heavy rains, and stays moist/soft for the first half of the summer.  There are a lot of trees in that area and we have lost some and are losing others.  The driveway work will give us additional parking for people visiting in their RVs and create the main approach to the location for the bus barn that I hope to eventually build.  The topsoil that Phil pulls out from the driveway will be used to fill in low spots on the west end of the property, further improving the drainage in that area. 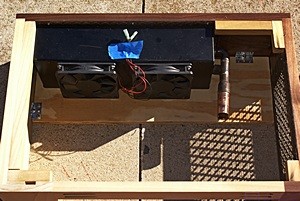 The right desk base viewed from above/behind showing the fans mounted on the back side of the heat-exchanger.

Linda returned to stripping wallpaper in the bus while I folded the laundry and put it away.  For dinner we had a salad and more of the soup that Linda made yesterday.  After dinner Linda researched wallpaper installation while I worked at my computer and uploaded eight blog posts from the third week of July.  About the time I finished the last one Brendan called so I went upstairs and Linda put the call on speaker.  He is a couple of weeks into his position at Eastern Michigan University teaching Art History and gave us a status report on how it is going, along with news of how Madeline is doing in her new daycare program University of Michigan.

We watched Dr. Michael Greger’s 2015 nutrition research summary on Linda’s iPad.  This is an annual presentation that he does at the vegan Summerfest in Pennsylvania.  His theme this year was the top health concerns of Americans, based on a major survey that was done by one of the national survey organizations, and what nutrition research has to offer with respect to these.  As we already know, many different diseases, one common answer; whole-food, plant-based, nutrition with no animal products.  We really are what we eat, and Americans are now some of the least healthy people on the planet.  We went to sleep reaffirmed in our dietary choices.