I was up at 7:15 AM and showered.  The rain finally cleared out leaving blue skies but with scattered white clouds still blowing across the region on brisk winds out of the NNE.  Linda was up by 8 and got the fresh fruit ready for our breakfast cereal while I made the coffee, which we enjoyed in the living room to warmth of the natural gas fireplace.  I did not expect to be using the fireplace this time of year but we have the furnace turned off, and are still getting overnight lows in the 50’s, so the fireplace is an effective and charming way to alleviate the slight morning chill in the front of the house. 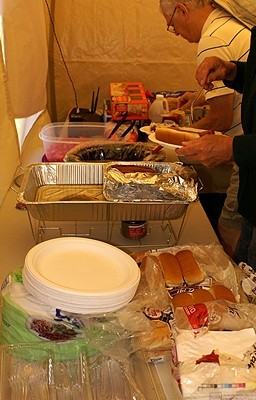 In spite of the weather the food tent stayed up and open for business.

I finished up the draft of my blog post for yesterday and started on this one while I drank my coffee.  By 9:45 AM I was ready to install the #6 green coated ground wire I bought last night.  I also decided to switch out the coax from the cable entry box (CEB) to the ham shack.  Linda had made a grocery list and left to do the shopping.

Outside I opened the CEB and disconnected the current VHF/UHF coax and let it slide back into the sump pump room (SPR).  Inside I removed the suspended ceiling tile in the northeast corner of the ham shack and routed the ground wire over the wall into the SPR.  I fed it through an existing cable tie on the bottom of one of the floor joists and through the outer wall into the CEB.  I had an unused copper ground lug and used it to connect the ground wire to the lower right mounting stud for the CEB copper backplane.

Back inside I uncoiled a length of 50 ohm coax that I borrowed from Mike (W8XH) and followed the same path as the ground wire.  Outside at the CEB I installed an N-male/SO-239(F) adapter onto the PL-259 connector on the end of the coax and attached it to the N-female socket on the lightning arrestor.  I was finished working in the CEB, closed the cover, and went back to the basement.

I decided to install the 36″ copper ground bar on the wall behind the ham shack desks just below the 120 VAC outlet strip, which required me to move the desks away from the wall.  I attached the end of the ground wire to one of the studs by spreading the strands and placing them under a washer and wing nut.  I need to get another copper lug to do this right. 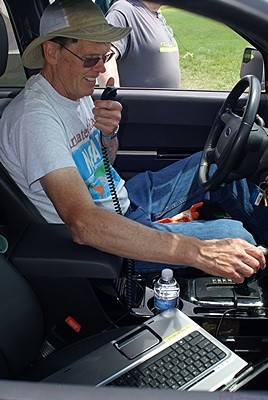 Steve (N8AR) operating the 6m opening from the radio in his car.

I had a five foot length of braided tinned copper strap and used it to connect the ground terminal on the Go Box to the ground bar.  I spread the braid apart to make a small hole near each end, slipped the holes over the studs, and clamped them under washers.  This was a temporary arrangement for testing purposes.  I need to configure a length of #10 copper wire with a ring terminal on one end and a make spade connector on the other but did want to take the time to do that today.

With everything hooked up I called Mike (W8XH) to see if he was available for a quick radio test.  He was still at home and about to leave for the SLAARC Field Day site but gladly delayed his departure long enough to help me test the new configuration.  The result was a better send and receive signal on 2m, both direct and through the South Lyon K8VJ repeater, with an S3 received signal strength with the pre-amplifier turned on.  The direct signal was also a little better on the 440 MHz band but my received signal from the Novi repeater was still weak and noisy and my transmit signal was still not strong enough carry the repeater.

I had planned to leave around 11AM for the SLAARC Field Day site but wanted some lunch before I left.  I had just made a sandwich and was gathering up my equipment when Linda got back from her grocery shopping.  By the time I left it was past noon.

I was interested in our ham radio club’s participation in this year’s ARRL Field Day event but neither Linda nor I had had any need or desire to operate radios.  I worked all day Friday on the setup of the towers and antennas and helped a bit last night with the emergency teardown of the VHF/GOTA canopy.  The 24-hour Field Day operating window closed at 2 PM today but some of the teardown began before that time and I wanted to be there to help. 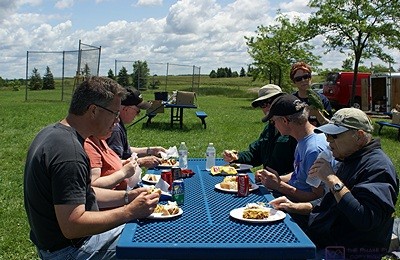 Some teardown was already underway when I arrived at the SLAARC Field Day site and lunch was also just being served, so everyone took a break to get something to eat except Steve (N8AR).  He was sitting in his car making contracts on the six meter (6m) band using the mobile radio in his car.  He had connected it to the 6m beam antenna on top of the big tower.  The 6m band is known as “the magic band” because it will suddenly “open” and allow very clear communication over great distances and then just as suddenly close.  It had apparently opened up this morning from the Mississippi River to the East Coast and south into the Caribbean.  One of our members made a contact with someone in the Dominican Republic.  While I was watching and listening I heard calls coming in from South Dakota and New Mexico.

This is the fourth year that Marianne Roney, the wife of one of club member Ed Roney (KD8OSM), has taken care of the Field Day meals, which include lunch and dinner on Saturday and breakfast and lunch on Sunday.  The meals are $5 per person per meal, which is a bargain for the variety and quantity of things she prepares and provides, except that there is typically very little we can eat.  She would make special provisions for us if we asked (she did the first year) but it is extra work for her and we are still left with not being able to eat most of what is available, so we do not purchase meals. 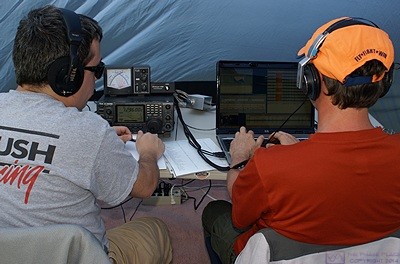 Operating stations are often staffed by two people, one operating the radio (left) and the other logging the contacts (right).

As the operating event was drawing to a close the computer in the 40m tent shut down.  The computers are not used to operate the radios, but are connected to them and are used to log the contacts using the N1MM Logger+ program.  The program reads key information about frequency and mode from the radio so all the logger has to capture are call sign, operating category, and section.  (Club member Larry, K8UT, is a member of the N1MM Logger development team.)  Every radio was paired with a laptop computer running this program, and the computers were all linked together via Wi-Fi.  As a result, the operators/loggers at each station could see all of the contacts that were being made regardless of which station made the contact and each computer contained a complete list of contacts.  The program also flags “dupes” (duplicate contacts).  In a contest situation this allows the operator to see that they have already worked that station on a particular band and mode and not spend time working it again on the same band and mode as duplicate contacts do not contribute to the contest score.

Just as it had started 24 hours earlier, at 2 PM it was all over without any fanfare.  The radios and computers were shut down and then the AC power generator was shut down.  Cords were unplugged, coiled, and staged near the vehicles they would eventually be loaded into.  Radios and computers were carefully disconnected, boxed (in some cases) and carried to the vehicles of their respective owners.  Tarps were pulled from the tents and folded and then the tents were collapsed and folded.  Four of use took down the 40m crossed dipole (inverted V) antenna and then took down the small support tower and disassembled it.  A larger crew eventually lowered the bigger tower, which required a winch, until it was resting in a step ladder.  This was necessary because of the two beam antennas at the top of the tower.  They removed the 6m and then the 20m beam antennas and then lowered the tower to the ground.  Part of the crew disassembled and packed the two beam antennas while the rest of them took the tower apart 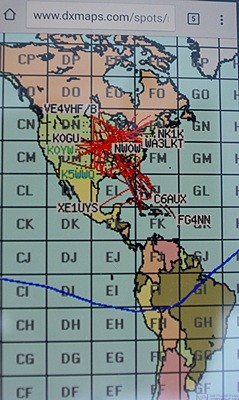 We were essentially done with the teardown by 4 PM.  The teardown is always much faster than the setup and yet it was very relaxed and went very smoothly.  In spite of weather challenges all day Saturday and overnight into Sunday, and the disappointment of not having all of our stations on the air due to losing tents to the wind, we had a beautiful last day for the event and teardown.  Blue skies, white puffy clouds, cool temperatures, lighter breezes, and low humidity combined with a sufficient number of competent, helping hands, made for easier work for everyone.  The group stood around reflecting on the event and everyone was in a good mode, a sure sign that the 2015 ARRL Field Day had been a success for the South Lyon Area Amateur Radio Club.

I was the last one to pull out, right behind Steve who was towing a fully loaded enclosed trailer with a lot of the club’s equipment in it and on it.  We chatted via the South Lyon repeater on the drive home, our last radio work for the day.  I was home by 5 PM and just relaxed until dinnertime, tired from the sun, fresh air, and work.  For dinner Linda made a potato and spinach curry dish that she found in her Indian cookbook.  She also steamed some asparagus that she bought at the Howell Farmers Market this morning.  We had a quiet evening of reading, writing, and games before turning in at 10 PM.