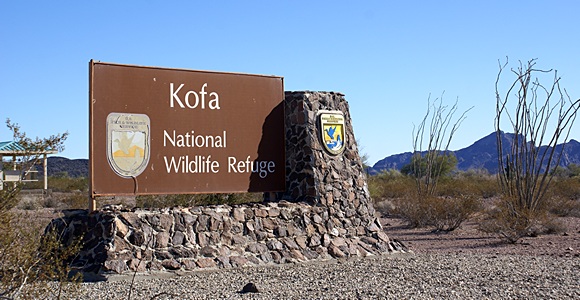 I slept in until 8 AM, got up, put on my sweats, and made a pot of coffee.  While that was brewing I turned the TT-400C TPMS monitor on and then adjusted the pressures in the four car tires and checked the passenger side steer tire on the bus.  Based on the temperatures it was reporting the monitor appeared to not be picking up the six rear tires on the bus so I plugged the PressurePro repeater in.  It is mounted in the passenger side rear corner bedroom cabinet and Darryl Lawrence said it should work fine with the TT-400C monitor.  Consumer TPM Systems all operate on the same frequency of 433.92 MHz and the repeater just receives, amplifies, and retransmits signals on that frequency.  The sensors have a unique digital identity and send out an encoded digital signal; that’s how the receiver/monitors know which signals to display and ignore the rest. 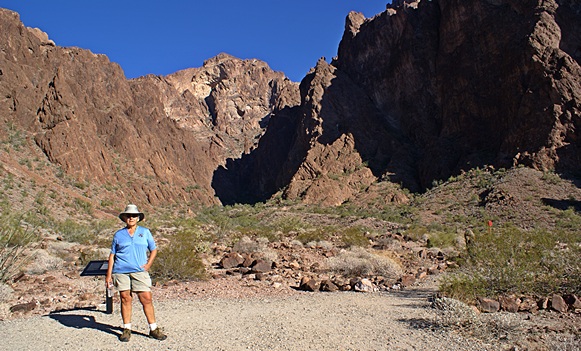 Linda in the parking lot at the mouth of Palm Canyon, KOFA NWR, AZ. 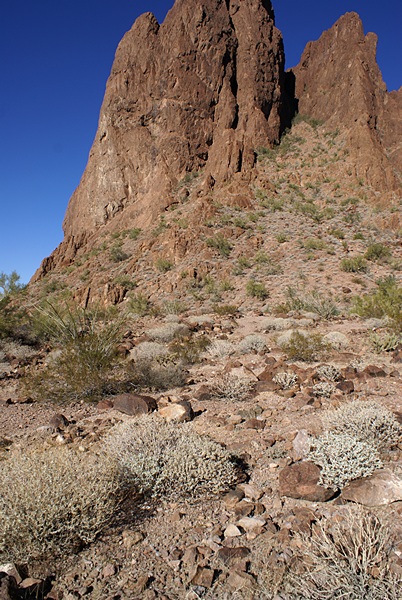 After a breakfast of juice and cinnamon raisin oatmeal Linda went for a walk while the air temperature was still cool.  I stayed at the coach and dumped the holding tanks, made up our mixture of a bottle of PineSol with an equal amount of water and a cup of Calgon bath beads.  Shake until dissolved and add ~60% to the black tank (via the toilet) and the other 40% to the gray tank via the bathroom and kitchen sinks, including the In-Sink-Erator. 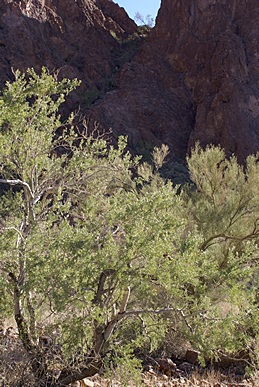 The beginnng of the Palm Canyon trail, KOFA NWR, AZ.

With my chores done I recorded the dump in our notebook and then added the information to our Water Usage spreadsheet.  According to the spreadsheet and our notebook it had been 19 days since we last emptied the waste tanks.  I knew that wasn’t possible as we normally dump every 9 to 10 days when we are in normal water usage mode, and Marilyn was here for the first half of that interval.  Clearly we had forgotten to record a dump 9 or 10 days ago. 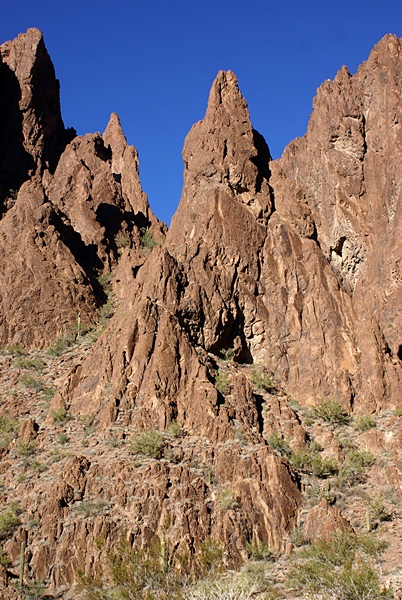 I finished working on some additional draft items for the survey the FMCA National Education Committee wants to send out.  I sent them to the committee chair (Gaye) and the member whose items I was revising.  We have another phone meeting on Monday and I wanted to get these items out to the committee by tomorrow so the members have time to look at them.

I got an e-mail from Gary at BCM last night advising the editor that I was doing an article on Quartzsite for the February 2015 issue and would have it done by the end of next week.  I e-mailed him back last night and then wrote it this morning and e-mailed it to him and Mike, the editor, for review.  Although I am no longer employed, I sometimes still work better against a deadline. 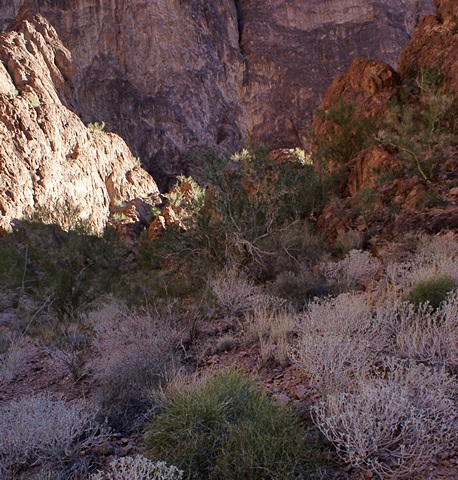 After cleaning and waxing the bus and spending a lot of time sitting in front of our computers we wanted to get away from camp and do some sight-seeing.  The repair we had done yesterday to the passenger side rear tire on our car seemed to be holding so at 2PM we headed for the King OF Arizona (KOFA) National Wildlife Refuge (NWR) Palm Canyon area about 20 miles south of town. 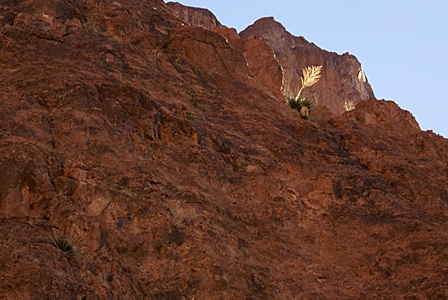 A lone palm backlit high up on the south wall of Palm Canyon, KOFA NWR, AZ. 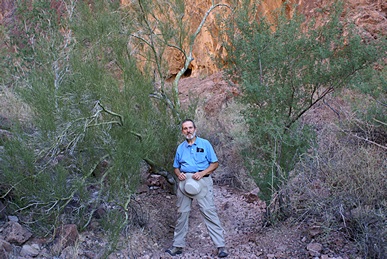 This seemed like a good spot to stop and let Linda take my picture for a change. Palm Canyon, KOFA NWR, AZ.

Palm Canyon is an enormous slot in the Kofa Mountains.  The canyon is aligned ENE to WSW opening to the WSW so we figured the best light would be in the mid-to-late afternoon.  To get there we drove south out of Quartzsite on US-95 about 19 miles to Palm Canyon Road and then east for seven miles on a good gravel roadway.  Good is relative, of course; it took as long to drive the 7 miles as it did the 19.  The trailhead is at the end of the road, which is the beginning of the canyon.  There are also several areas just off the parking/turnaround designated for tent camping, and it would be a spectacular place to pitch a tent.  The last mile or so of the road climbs more than you realize until you get to the parking area and are treated to a sweeping view of part of the La Paz Valley that stretches for over 100 miles from Parker on the north end to somewhere north of Yuma on the south end. 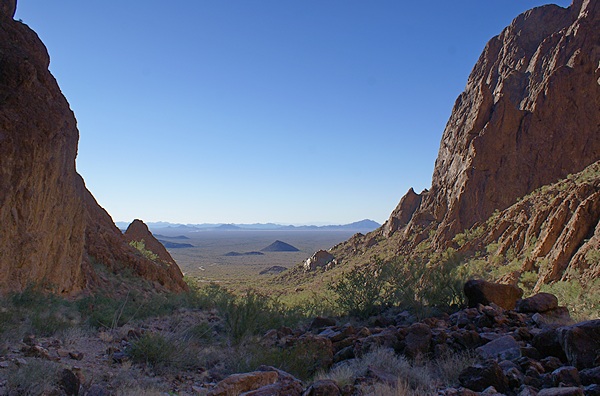 Looking WSW back out of Palm Canyon at the La Paz Valley. The trail climbs it goes deeper into the canyon. KOFA NWR, AZ. 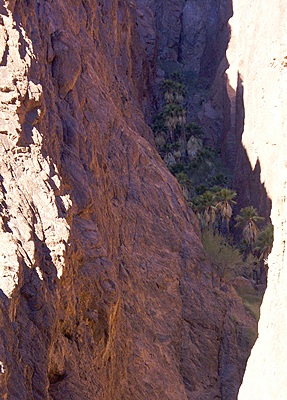 There they are! The fan palms of Palm Canyon high up in a shaded crevice on the south wall of the canyon. KOFA NWR, AZ.

The trail is a 1/2 mile hike into the canyon near the floor but to the south of, and above, the central drainage wash.  The canyon is named for the California Fan Palm trees that grow there; the only naturally occurring Palm trees in Arizona.  There is lots of other vegetation in the canyon, however, and the palms are a bit elusive.  About a half mile in there is a small wooden sign with an arrow pointing up to the left at a 45 degree angle.  All the sign had on it was the word “PALMS.”  And there they were, way up in a narrow crevice.  Mind you, some of the trees in this main grove have trunks that are 20 inches in diameter, but the canyon is a big place and the trees are far away from where we were standing.  The only wildlife we saw up close were small lizards about 3″ long, 6″ with their tails.  We heard and then saw a bird soaring high above the southern edge of the canyon but could not tell what it was. 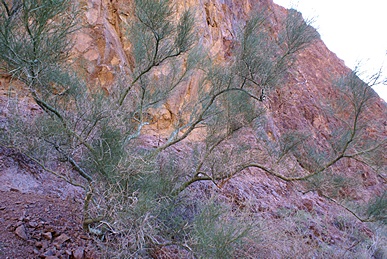 The light was nice hiking in and got better and better as we hiked out.  The trail climbs quite a bit from the parking area, but not steeply in any one place.  We took our time and I took a lot of photographs.  By the time we got back in our car the sun had slipped behind the Dome Rock Mountain Range that defines the western edge of the La Paz Valley.  We had nice colors in every direction but without any clouds we did have a particularly photogenic sunset.  By the time we got back to US-95 it was approaching 6:20 PM and we needed our headlights even through the glow along the crest of the mountains continued almost all the way back to town. 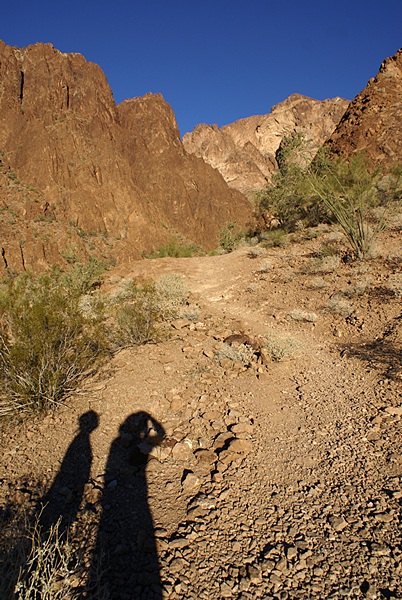 Looking back into Palm Canyon as we hike out. KOFA NWR, AZ.

Linda made a green salad with fresh tomatoes and blueberries, dried fruit, and nuts and dressed it with Raspberry Walnut Vinaigrette.  She heated up a couple of tortillas and used them to make a quesadilla-like thing with Daiya (vegan) cheese, tomato slices, and jalapeño pepper slices.  We had a small glass of Franzia Refreshing White wine with dinner and had red grapes for desert.

Before we left for our hike I had unplugged the power supply from my ASUS notebook computer to let it cool off.  It seems to me that it runs hot.  I plugged it in when we got back and had a notification on the screen that the computer needed to be restarted to complete the installation of updates. 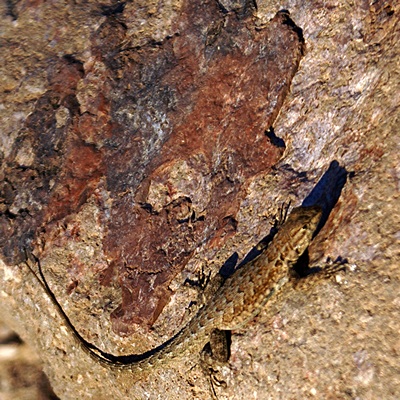 The only wildlife we saw up close in Palm Canyon. KOFA NWR, AZ. 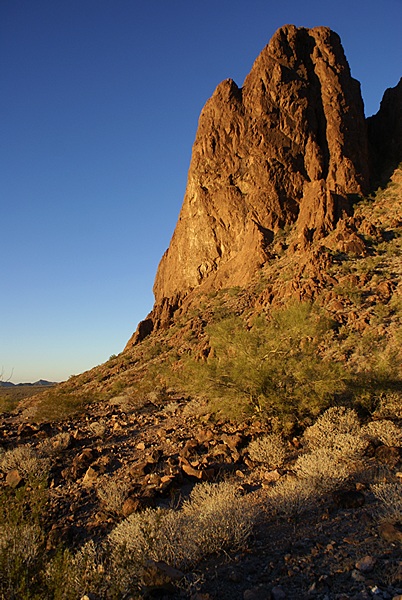 The north wall at the entrance to Palm Canyon in the glow of sunset. KOFA NWR, AZ.

I decided to check my e-mail first and had a couple from Gary, so I called him after we finished dinner and we chatted for about an hour.  It sounds like the article I sent him this morning on Quartzsite 2015 won’t run until the March issue, so that will give me a little more time to select and process photos, experience more things here, and possibly extend the article a bit.  In the meantime Gary is going to have Stacy proofread all of the articles that are ready plus the one I just sent.

My ASUS laptop keyboard appears to be functioning correctly again so I was reluctant to restart my computer, but the message said it would restart in one day on its own anyway.  I guess there’s no time like the present to find out if the machine has a problem.  It finished whatever it was it needed to do, powered down, and restarted without a hitch.  I then copied all of the photos from our canyon hike to the computer and NAS and started looking at them.  I processed a few and then went to bed.