Madeline slept well again last night.  She was awake before 7 AM this morning but still a little tired.  Linda warmed her bottle and gave it to her.  She stretched out in Linda’s lap to drink her bottle.  She’s a busy girl and a good eater and is usually up and active as soon as the bottle is done, but this morning she stayed quietly in Linda’s arms for almost 45 minutes playing with her (own) hair and carrying on a conversation.  I think Madeline really likes her Grandma Linda.  I know Linda enjoyed being able to hold her for that long. 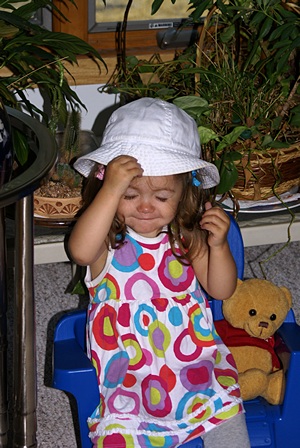 Madeline likes her hat and her chair!

Back at the house Linda played with Madeline while I raked out the part of the pull-through driveway the landscapers tore up (as best I could) and then compacted it using the Honda Element (as best I could).  Madeline positioned her little plastic Adirondack chair by the front door and watched me work.  I then started the main engine on the bus, let it air up, and moved it forward about eight feet, but stopped short of the disturbed area.  I reset the parking brake, put it in high idle, turned on the over-the-road air-conditioning, and let it run for 30 minutes to get the engine up to operating temperature.  I then turned off the A-C, let it high idle for a couple of minutes, dropped the idle down for another minute, and shut everything down.  It is not good for big diesel engines to be started up and then shut down before coming up to operating temperature and is not good to shut them down with giving them a few minutes to cool down and let the head temperatures fully equalize and the turbo to spin down. 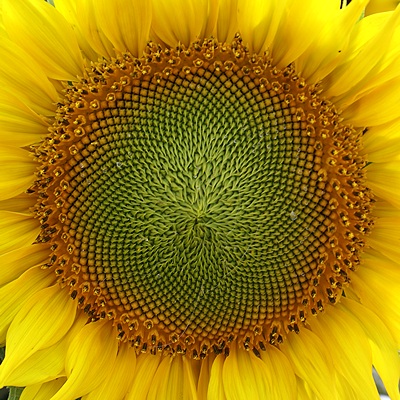 Brendan, Shawna, Chris, and Meghan were due to arrive around 3 PM, so there was no way for us to work in the garage while Madeline napped and still have time to get cleaned up.  Madeline laid down for her nap a little ahead of schedule.  While she was napping Linda cut my hair and then prepped the ingredients for a porcini mushroom quinoa risotto while I got cleaned up in preparation for company.  Linda was done prepping dinner by 2 PM and then got ready for company. 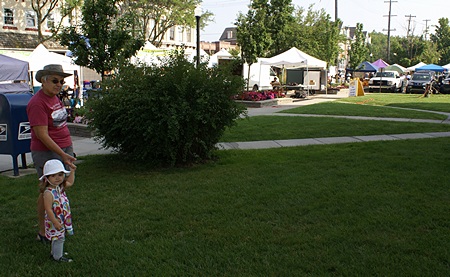 At the Howell Farmers Market.

Madeline awoke just before 3 PM and Linda had her up and dressed in her new Winnie-the-Pooh jumper before everyone arrived a short time later.  Within the span of 15 minutes she suddenly had a house full of admirer’s and had a very engaged and energetic afternoon. 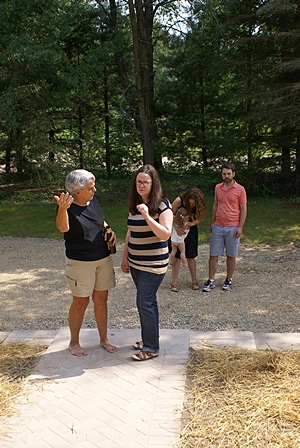 Dinner consisted of a salad, the quinoa risotto, and roasted Brussels sprouts.  The salad was good and everyone liked the risotto; most of us had seconds.  Meghan pronounced the Brussels sprouts roasted to perfection.  The outer layers were crisp like kale chips and the insides were soft without being mushy.  We had fresh strawberries and coconut milk ice cream for dessert.  Chris’ daughter, Katie, was unable to attend because she was “up north” with her mom/family, but it was nice to have the rest of our immediate family gathered for dinner. 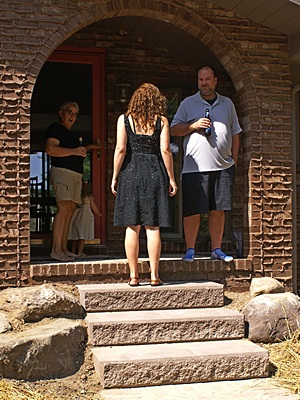 Linda, Shawna, and Chris on the front porch (new steps and sidewalk).

There was more vigorous playing after dinner but eventually everyone had to leave.  Once they were gone I picked up toys while Linda loaded the dishwasher and then we relaxed on the deck for a while.  Sometime during the day a “Check Tel Line” message appeared on our phone and we did not have a dial tone.  I decided we should do something about it before we settled in to watch an episode of Doc Martin.  The procedure required us to open the Network Interface Box, unplug the house from the AT&T line, wait 60 seconds for a reset, and then plug in a known good telephone to check for a dial tone.  We have a couple of old phones (not cordless) but could not find them, so we took our cordless base station out and used it.  The problem was definitely somewhere in the AT&T system, not our house.  We filed an online trouble report and were told the problem would be fixed between now and Friday at 6 PM.  We turned in and watched Doc Martin, which we streamed via our AT&T DSL connection without difficulty.