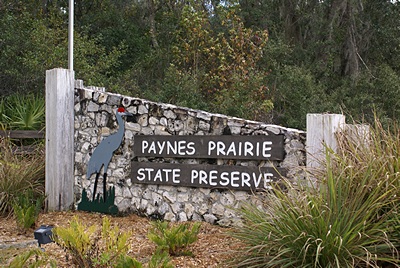 On the southern edge of Gainesville, Florida lies a surprisingly large and biologically diverse area known as Paynes Prairie.  Fifteen miles long and 50 miles in circumference, most of this ecosystem is now owned by the State of Florida and managed as the Paynes Prairie Preserve State Park.  Our winter encampment in Williston is only 15 miles SW of the SW corner of Gainesville, and so less than that to the south entrance of the park on US-441. 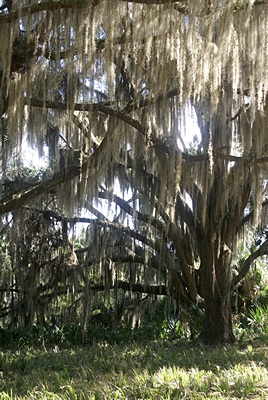 Although there was a 30% chance of rain for the mid-afternoon we had blue skies in the morning and pleasant if somewhat cool temperatures, so we decided to drive over to the Preserve and check it out.  Members of our FMCA Freethinkers chapter had planned their arrival in Florida to include a couple of nights at Williston Crossings, so we knew we would be sticking around the RV resort to visit with them while they were here.  Besides, with our annual State Park pass we don’t have to worry about paying entrance fees only to have our plans cancelled by weather. 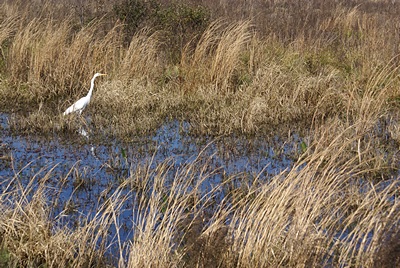 The south entrance has a ranger station and is where the Visitor Center, campground, observation tower, and several hike/bike/horse trails are located.  We watched a 20 minute film on the history and current restoration of the area.  By the time it was over it had started raining, so we spent some time in the Visitor Center looking at the exhibits.  The rain let up so we hiked out to the observation tower and walked up to the top platform (50 feet high).  The rains returned and we waited out the light showers on the covered observation platform.  The view from the tower gave us a sense of the expanse of Paynes Prairie. 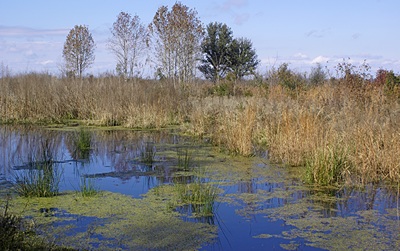 Along the Cove Dike Trail, PPSP.

The skies cleared from the north and we hiked part of the Cove Dike trail along the southern edge of the prairie.  You have to pass through a narrow serpentine entrance to get onto the part of the trail that runs along the edge of the treeless and wet prairie.  The sign includes a warning that you are entering a wilderness area and that the prairie is not a zoo or petting farm; the animals (alligators, bison, horses, etc.) are wild.  The serpentine entrance is presumably to keep these larger, wild animals from escaping the preserve, which appears to be completely fenced.  It’s odd, and yet very cool, to read such a sign with the broadcast TV antennas of Gainesville visible on the horizon some 15 miles away.  Wilderness is not always remote. 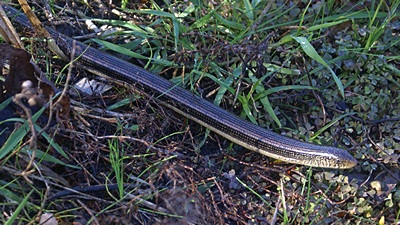 The Cove Dike trail was high and dry for the most part, but the prairie was very wet.  The only animals we saw we birds and a small snake that I almost stepped on.  We saw evidence of larger animals including bison and horse scat, hoof prints, and areas of earth that had been disturbed, perhaps to create a resting place for the night. 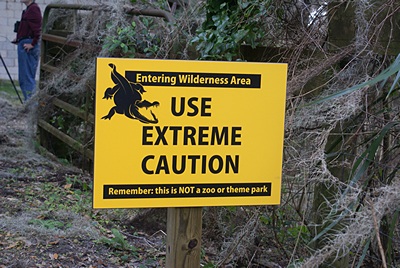 This place is not a zoo or theme park.

The area has had a lot of rain the last few weeks and part way out the trail was closed, so we turned around.  Once back at the car we drove around to the north entrance, which you get to by driving through a subdivision.  Again, we had to pass through the serpentine entrance with wilderness warning signs.  From this entrance there is a boardwalk that leads to an old dike that goes out into the prairie.  The best wildlife viewing, including alligators, is purported to be from this trail.   We had just gotten to the beginning of the boardwalk when the rain resumed.  Concerned about getting the camera wet, and wanting to photograph the area, we decided to return another day with better weather and headed back to the car. 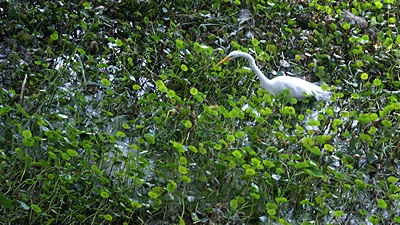 After a day on the edge of wilderness Linda made Farro with mushrooms, onions, garlic, and Swiss chard.  She added a few hot red pepper flakes which gave the dish a nice edge. We finished up a bottle of Yellowtail Moscato we had opened the night before.  A very sweet, relatively inexpensive wine that we can get at the Grocery Depot in Williston, walking distance from the RV resort. 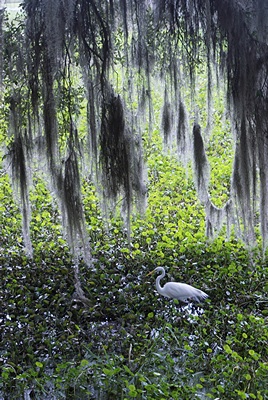