I heard noises in the kitchen at 7 AM and thought the cats might be up to something.  I got up and discovered that Linda was just leaving the house.  She is normally out the door between 6:15 and 6:30 AM but did not set her iPad alarm last night.  I stuck my head out the door and said “good morning” as she was getting in the car.

I had my usual breakfast of granola with fresh blueberries and brewed a half pot of Sumatra Mandheling half-caffe coffee.  I was enjoying my cup-a-joe by the fireplace when Linda called to let me know there was a story coming up on Michigan Radio (WUOM) at 8:30 AM about an underground landfill fire in Bridgeton, Missouri.  Bridgeton is where my sister, niece, future nephew, and grand-niece live and I had just heard about this fire for the first time on Sunday evening while talking with my sister.

I got the leaf blower out at 10 AM and spent a couple of hours blowing as many leaves out from under bushes and away from the house into the yard as I could.  Keith arrived at 10:30 AM and followed his usual mowing pattern starting with the west half of the property.  The lawn in the immediate vicinity of the house is the last area he cuts which gave me enough time to get the leaves out into the yard where Keith could mulch them.

Most of our trees have dropped most of their leaves by now and Keith’s mower did a pretty good job of mulching most of them.  Before he left we discussed having him come back one more time.  The grass has quit growing so my preference is to wait two weeks but that will depend on the weather.  Keith will check with us next Monday and we will decide what to do at that time.

Mike (W8XH) is planning to come over tomorrow after breakfast and help me work on the tower and our Hi-Q 6-80 antenna.  I have been collecting materials that I need and took a little time to see if they would work with the tower.  I also took the Diamond X-300N antenna down as I planned to put it on the tower in place of the X-50N that is currently up there.  My materials were not working quite the way I had hoped they would so I headed to Lowe’s to see what else I could find.  I also planned to drop off the used oil and filters from the bus at O’Reilly’s Auto Parts store.

At Lowe’s I found clamp sets designed for mounting antenna masts and bought a pair.  O’Reilly’s parking lot was still closed off.  It looked like it had been re-blacktopped and they were painting the stripes for the parking spaces.  This was my second attempt to get rid of the waste from yesterday’s bus maintenance.  I will try again tomorrow; with any luck the third time will be the charm.damage 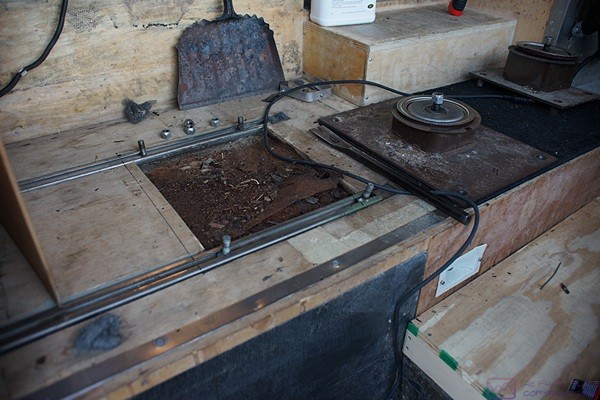 The area beneath the co-pilot/navigator seat. Not a pretty sight, especially when racing against the clock to get the coach finished for the upcoming winter season.

I finally got back to work on the bus at 2:30 PM and removed the front passenger chair pedestal base.  The entire area under the base, between the side-to-side seat mounting channels, was rotten so I cut out the water-damaged wood.  Just below the wood I found rusted metal which appeared to be delaminating.  Metal does not do that so I presume there was a layer of sheet metal on top of a metal housing.  The main structure of the bus is welded stainless steel but mild steel was obviously used to create compartments.  Ugh.

After cutting out the damaged wood the remaining piece towards the outside was loose but would not come out.  I removed a couple of screws from the 1/4″ walnut veneer side panel and pried the top out with a small screwdriver.  This panel has a lot of switches mounted in it and a lot of wires behind it so I could only pull it out about four inches.  That was enough to see a 3/4″x3/4″ piece of blocking screwed to the floor to catch/secure the bottom edge of the panel.  It also enough to see a very large nest made of tiny bits of shredded paper. 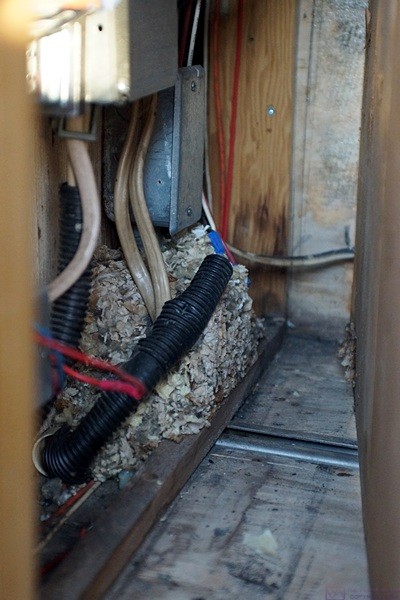 The cavity behind the panel to the right of the co-pilot/navigator seat was apparently a great place for a mouse to build a nest.

I left the nest alone for the moment and removed two screws from the block that went into the piece of wood I need to remove.  It appeared that a drain line for the front air-conditioner went through the floor near the outside edge and possibly some wires.  I left the nest for Linda to see and will resume working on this tomorrow.

Linda made vegan grilled cheese sandwiches for dinner and served them with some of the leftover broccoli soup and sliced fruit.  We each had a small glass of the Frey Natural Red organic/vegan wine.

After dinner I called Phil to see what his plans were for this week vis-a-vis our driveway and French drain projects.  I got his voice mail and left him a message.  When we left on Saturday afternoon he was just finishing up placing and compacting the gravel in the driveway but said the west end of the yard needed to dry out (again) before he could finish working down there.  Hopefully the new drain will help speed that process along. 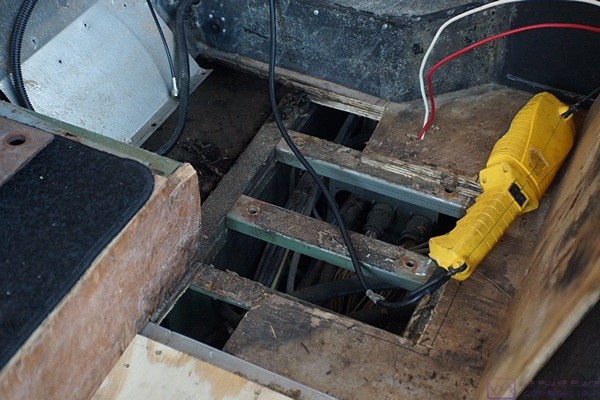 The floor area under the driver’s seat in the bus with all of the rotten wood cut out.

Phil uses a self-leveling laser level system to measure elevations.  Not only has he assured me that the new 40 foot parking area is level, he has demonstrated it with his system.  Still, it does not look level, especially from certain points of view, and it does not feel level when driving in it, although that may also be an optical illusion.  We have a transit level and I plan to use it to check the pad, but it requires two people, one to hold the measuring stick and one to look through the telescope and record the readings.  That means I need Linda’s assistance, which means this will have to wait until the weekend.  Perhaps by then I will have the cockpit in the bus repaired.  It’s also possible that Phil will have returned and completed the job, I which case I may have him help me use the transit as a check on his laser system.

We watched our usual lineup of Tuesday evening TV shows while Linda checked in on her online word games and I worked on this post.