I was up late last night and did not get to bed until 12:30 this morning, so it was nice to be able to sleep in until 7:30 AM.  I had spent the evening writing and editing photos but, as dusk turned to night, had noted that cool temperatures and clear skies were on tap for the evening.  While not a dark sky area, the sky above our RV park was starting to reveal a fair number of stars, including some fainter ones.  The Big Dipper was prominent, as always, in the NNW sky.

Around midnight I went out to have another look.  After letting my eyes adjust, I was able to just make out the Milky Way, running from horizon to horizon, ENE to WSW.  I decided to try and get a photo of a portion of it, just to see if I could.  I set the SONY SLT a99v on manual mode, 25600 ISO, 24mm focal length, f/2.8, and tried various shutter speeds (exposure times).

I didn’t bring a tripod on this trip, so I tried setting the camera on the picnic table pointing skyward, but I couldn’t get the camera shutter to trigger.  I did not bring my remote release cable on this trip either, so that option was not available.  (In fact, I left most of my camera gear at home.  The available storage space in the trailer and truck require decision about what to bring.)  That meant long, hand-held exposures, guaranteeing less than perfect, and probably unusable, results.

Astro-photography is its own little niche which, like all photo-niches, exists at the intersection of photography with some other interest.  I was fascinated with astronomy as a pre-teen and young teenager.  My involvement with photography as a hobby began when I was 16, by which time my interest in astronomy had faded.  Perhaps I thought it was cool to stay up late at night when I was 10 -13 years old but, for whatever reason, I never pursued Astro-photography.

I did recall, however, our time in Arizona in the spring of 2015 when we were camped with Val and Lou Petkus (silent key) just north of Organ Pipe Cactus National Monument.  Lou had acquired a SONY mirrorless camera that had excellent low-light sensitivity and was eager to try it out.  We were in a dark sky area, and he knew the Milky Way would be visible as an arc across the southern sky above the low mountains to our south.  I remembered that he used a high ISO setting of at least 12,800 and used exposure times from 8 to 20 seconds.  He had the camera on a tripod, of course, with the lens at its widest aperture and focused at infinity.  The photos he got were amazing, and revealed details that were unavailable to the naked eye.

I tried to emulate what Lou had done, as best I could without a tripod.  I tried exposure times from 1 to 20 seconds.  While the shorter exposure times resulted in less camera movement, they did not collect enough light.  One shot, however, looked like it might work.  It was a 20 second exposure that I made while lying on my back on the picnic table bench and bracing the camera.  It looked completely overexposed, and had slight movement, but the exposure histogram showed the image values fairly well centered, and substantial.  I was able to process this image in the morning to produce this result: 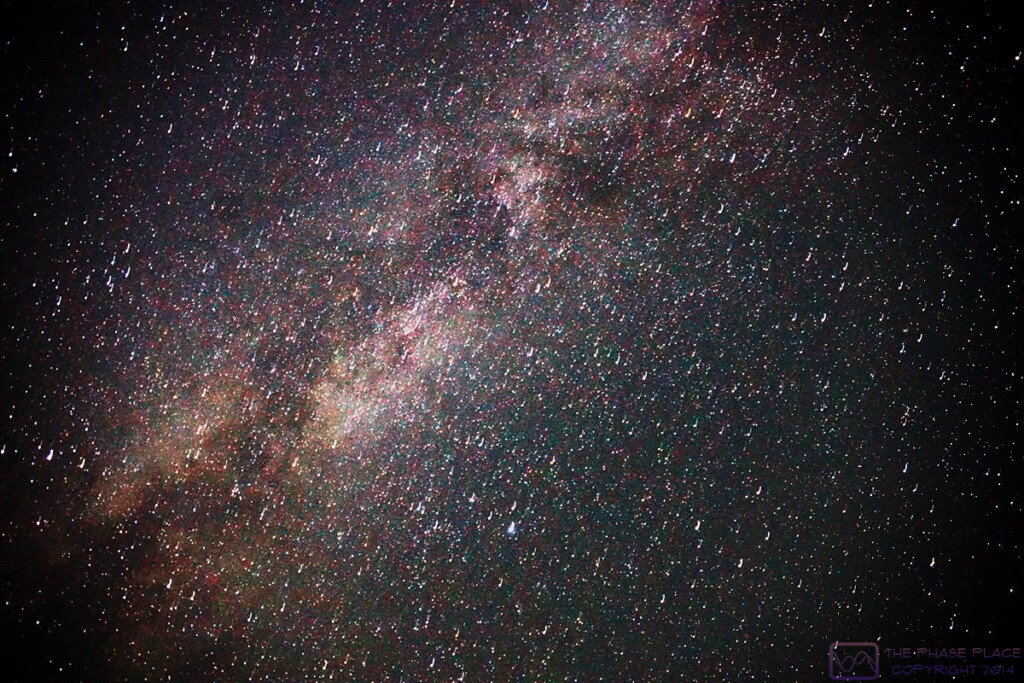 A gorgeous day was on tap, with blue skies, no rain, and a high temperature in the upper 60’s.  Our original plan for today was to drive into the Annapolis Valley, north and west of the KOA, as far Annapolis Royal.  The Annapolis Valley is essentially agricultural, however, which did not command our enthusiasm.  This would, however, have taken us through Windsor, Glooscap (Mi’kmaq First Nation), Wolfville, and Kentville, which is wine country.

While we hated to “waste” such a day, we were both a bit tired and not really looking forward to a 5-hour round-trip sight-seeing drive in the truck, especially with a travel day coming up tomorrow.  And, as much as we love wineries and vineyards, we would be re-entering the USA in 9 days, and did not want to buy any more wine than we could drink between now and then.  We briefly considered other options, such as a return to Peggy’s Cove or a drive up the first part of the Eastern Shore, but both sounded like too much driving.  In the end, we opted to step back from tourist mode and just stay in camp.  Since we were not going anywhere this morning, Linda made pancakes for breakfast, one of the perks of “camp days.”

Linda decided that she wanted to get a haircut and searched online for someplace not too far away.  She found a salon nearby in Mt. Uniacke, and called when they opened at 10 AM.  “Walk-in only, no appointments, and probably tied up until 2:30 PM.”  Her plan was to drive up around 2 PM.

She was glad to have a day in camp, and spent 30 minutes cleaning the floor before going outside to read.  I was also glad to have a day in camp, as I still had to process the photos from our trip to Burntcoat Head / Park yesterday, and finish writing the blog posts for August 30 and 31, and September 1, which included deciding where to place photos and writing the captions.  I also needed to upload, assemble, and publish them, but wasn’t sure if the RV Park Wi-Fi would be adequate for that during the day.

Around 1:30 PM we had a light lunch of Fritos and spicy roasted red pepper hummus along with a nectarine.  As 2 o’clock rolled around, Linda decided that she did not feel like going out to get a haircut after all, and resumed her reading.  We went out briefly around 3:30 to top up the fuel in the truck and pick up a package of hamburger buns.  (Our bakery buns from Sobeys had spoiled and had to be thrown out last night.)

Linda decided to grill hamburgers and Brussel’s sprouts for dinner, so we got the grill out and set it up.  After dinner, we went for a long stroll through every part of the campground.  By the time we finished our walk, the sun was dropping behind the trees and the temperature was dropping along with it.  The overnight low tonight was forecast to be 48 degrees (F).  She cleaned the grill and we loaded it back in the truck along with our camp chairs.  We had the last two So Delicious non-dairy ice cream bars for dessert.

We are just under 3 weeks from the autumnal equinox, and the hours of daylight have definitely diminished compared to the beginning of our trip and or our much more northern locations.  We are now very near the 45th parallel, which runs through the northern tip of Michigan’s Old Mission Peninsula (in the lower peninsula), but still north of the latitude of our home.  While there will be daily variances, the average high and low temperatures are definitely dropping with each passing day, and the chill in the evening air is a prelude to fall.

The Wi-Fi at this KOA has not been great, but it has not been terrible either.  When we can connect to it, it often works reasonably well.  But when all of our devices need multiple things updated, it’s a challenge to get it done.  As has been the case with most of our RV parks on this trip, early morning and late at night have been the workable times.  My Google Pixel 6 Pro smartphone, informed me that I was 1 to 2 days late installing a system update which was 1.2 GB in size.  I get 500 MB (0.5 GB) of data per day.  It needs to be done, of course, and we tend to be meticulous when it comes to installing updates in a timely manner but really, Verizon, how did you think I was going to accomplish this?  We had a lot of updates for our iPad apps too, so I suspected an iPadOS update was also coming soon.

Linda headed off to bed at 10 PM and I turned down my bedding so it would be ready later.  She set the zone 2 heat-pump to heating mode and the thermostat to 62 degrees (F).  The temperature sensor was already indicating 64 degrees (F), so it would definitely run during the overnight.

At 23:45 I logged in to our WordPress site and started uploading and assembling the blog post from our Tuesday visit to Peggy’s Cove and Lunenburg.  I finished the process right at midnight and published it.  I was on a roll, so I proceeded with the post for Wednesday’s visit to Halifax.  I clicked the “publish” button at 12:24 AM.  It started the process, but then indicated it had lost connection with the Internet and was backing up the post in the browser until the connection was restored.  At 12:25 the connection re-established itself and the process finished successfully.  I deleted the 42 spam comments that had come in since the last time I logged in, and then logged out.  Getting these two posts published was a big deal for me; they were both long and had a lot of photos.  I will probably have to deal with the posts for Thursday and Friday (this one) once we get settled at our next RV park. I headed to bed at 12:31 AM.  Not ideal the night before a travel day, but we did not have to leave early which would allow me to get enough sleep.