I woke up to stay at 7:20 AM, got up shortly thereafter, and got dressed to work.  Today was finally wallpapering day.  I fed the cats and refilled the reservoir on their recirculating water dish.  Linda was still sound asleep, and I suspected that she did not sleep well last night, so I closed the bedroom door while I ground the coffee beans so as not to disturb her.  She is still fighting off a cold and/or allergies and so am I.  I used the last of the Ethiopian Yirgacheffe beans plus a couple of scoops of the Kenya AA.  We are a day or two away from being out of coffee and will have to get some more when we go out this morning to buy wallpaper paste and tools.

Linda got up at 7:40.  Phil had not shown up yet nor called to update us on whether he would be here so we were left to guess that he was on his way to the other last minute job that he said he would probably have to take care of today and tomorrow.  The temperature at 8 AM was 55 degrees F with light fog.  It looked very wet outside but I could not tell if it had rained overnight or if it was just heavy dew.  The high was forecast to be 72, and we have the electric heaters on in the bus, so the walls should be warm enough for us to hang wallpaper today.

We left at 9:30 to go buy wallpaper paste and a few tools at Lowe’s in Howell.  We stopped at Teeko’s on the way and ordered three pounds of coffee beans.  We got one pound each of the following, roasted to order:  1) Sweet Seattle Dreams (1/2 Seattle Blend and 1/2 Sweet Dreams decaf blend); 2) Ethiopian Yirgacheffe half-caff; and 3) 1/2 Sumatra Manhelding with 1/2 Sumatra decaf.  At Lowe’s we bought a gallon jug of Roman GH-95 Wallpaper Paste for Kitchen and Bath.  It is supposed to be more suitable for high moisture environments and since we tend to use the bus with the windows open it can get humid inside.  We also got a smoothing tool, a 24″ paint shield to use for as a trimming guide, a 1/4″ nap 9″ long roller cover, and an inexpensive paint brush.  We stopped at Teeko’s on the way home and Roger had our coffee beans ready for pickup.

Back home I gathered up the tools we already had and took everything to the bus.  I got a scrap of underlayment to use as a small work surface for measuring and cutting off lengths of wallpaper.  We did not have room to set up a work surface in the bus that was big enough to roll out the wallpaper and apply paste to the back side so we decided to apply the paste to the walls using a roller and brush.

Before we got started installing the wallpaper Keith showed up around 10:45 AM to cut the grass.  I wasn’t sure he would come today due to the wet conditions, but he did not think it was wet enough to be a problem.  It’s been two weeks since the last grass cutting and it definitely needed to be mowed, at least in some places.  We also cut up and moved a couple of downed trees so he was finally able to mow the grass where they had been.

I had just finished chatting with Keith when Phil showed up around 11 AM to pick up his small excavator.  He had been at another job since 7 AM.  It was supposed to only involve “moving some stone around” so he only took his front loader to the site.  When he got there he was shown a much more extensive landscaping plan and a job site that included removing tree stumps and other digging operations.  Even with that his plan is to be back at our place on Wednesday.

My first task was to sand the primed walls.  I used the Porter-Cable palm sander, first with 120 grit sandpaper and then with 220 grit.  Linda then wiped down the walls with tack cloth while I put the sander away.  There is not a lot of room to work in the bus so we try to remove tools that we are not using.

We finished gathering our tools and materials, including two big buckets of water (one with mild soap) and spent an hour pondering the wallpaper installation.  Part of the pondering involved measuring the three wall areas that were ready for wallpaper and deciding where we would start and how we would proceed from there.  By the time we were ready to cut and paste wallpaper it was 12:30 PM so we took a break and had a sandwich and grapes for lunch.

When we unrolled the first double roll of wallpaper we noticed periodic faint horizontal “lines.”  These turned out to be slight impressions from the outside edge of the end of the roll which was very tightly wrapped in clear plastic.  We decided to cut four shorter pieces to go behind the desk and behind the sofa just in case the impressions did not smooth out and disappear.  We cut two more short pieces to continue forward under the windows on the passenger side.  We then cut longer pieces for the corner behind the desk and the wall at the kitchen end of the sofa.

The last time we hung wallpaper was 30 years ago.  It was all pre-pasted and required reverse rolling the piece to be hung, immersing it in a water tray to activate the glue, and then slowly pulling it out as it unrolled and drained.  We then slid it into position on the wall, smoothing it out and removing the air bubbles as we went, and finally trimming it.  The wallpapers we used were thinner than the stuff we have for the bus and we created seams by overlapping adjacent panels slightly and cutting through both pieces half way between the overlap.  The free edge pieces were both removed and we had perfect seams.

The wallpaper we bought for the coach is a heavier vinyl that is washable and scrubbable.  We got the paper from Delux Drapery & Shade Co. in Ann Arbor but it did not come with installation instructions other than to follow the adhesive manufacturer’s directions.  The associate at Lowe’s, however, was very helpful and told us specifically not to overlap and trim the seams the way we had years ago.  The appropriate technique for the heavier vinyl wallpapers is to butt the edges together and roll them flat.

You always reach a point in every project where there is nothing left to do but to do it.  We poured some of the paste into a paint tray (with a plastic liner for easier cleanup later).  I started on the passenger side of the bus in the corner behind the desk on the back side of the pantry.  I used the brush to cut in the corners where the wall met the adjacent woodwork and used the roller to fill in the field.  We butted the right edge of the panel into the corner along its full length and then smoothed it towards the left and top as best we could.  The wall curves in as it goes up but I got the top edge tucked and trimmed.  I made a relief cut at the bottom of the window surround on the left which allowed us to finish smoothing the bottom portion of the panel under the window and get the upper panel tucked in, where the wall meets the surround, and trim it.  I then trimmed around the window release mechanism and along the bottom of the panel. 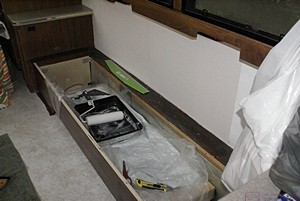 Wallpaper tools in sofa (seat removed) and wallpaper on wall behind the sofa.

The vinyl wallpaper did not trim easily even with a new, very sharp, break-off style blade.  It also did not want to stick to the wall and we ended up peeling it back in places and spreading more paste.  We had primed the walls with Zinser 1-2-3, a water-based acrylic primer, so they should not have been very absorbent.  We hung a total of eight pieces, five on the passenger side and three on the driver side, and stopped for the day.  The wall in the hallway was prepped for four additional pieces but we decided to defer those until to tomorrow.  We cleaned up all of the tools and then relaxed for a while in the living room.

Linda prepared dinner while I worked on this post.  I could not figure out from the odor what she was making but it sure smelled good.  It turned out to be a tofu scramble, a vegan interpretation of scrambled eggs, and she served it with toasted raisin bread.  Very tasty and very satisfying.  It’s the one breakfast dish that she makes that does equally well as a dinner meal.

I drove to O’Reilly’s Auto Parts to get some door edge trim/guard and stopped at the Meijer’s supermarket for tissues and laundry supplies.  The door edge trim is a plastic U-channel that I will use to cover the edge of a hole (or holes) I will cut in the passenger side HVAC duct for the Aqua-Hot heater hoses to base through into the desk bases without making any sharp turns.

We felt like being entertained and settled in to watch several TV shows.  In-between two of the shows I made popcorn, a rare treat for us but one we really enjoy.