Linda decided last night to work at home today rather than driving into the bakery in Hamtramck.  That meant she did not have to get up at 5:45 AM.  She was up just before 7 and I was up just after that.  I made a large pot of Sweet Seattle Dreams half-caffe coffee and Linda toasted slices of cinnamon raisin bread for breakfast.  After breakfast she settled in to work at her desk while I tended to several chores.

I last changed our whole house water filter in May (of this year) and it looked like it was overdue for replacement.  I had one filter element left so I used it.  The process is simple enough:  I turned off the well pump, shut off the valves on either side of the filter housing, released the pressure in the housing, and unscrew the removable bowl.  When I unwrapped the filter and read the directions I was reminded that I am supposed to clean the bowl with warm, soapy water, rinse it clean, and then sanitize it with a bleach solution and rinse it out again.  That requires water, of course, but I had the water shut off and the filter housing disassembled so I had n way to turn the water back on.  The only way to accomplish this would be to stage the needed water before shutting off the water system but I never remember to open the new filter element are read the directions before I start.  I mean, really, it’s not the sort of procedure that requires me to read the directions each time. 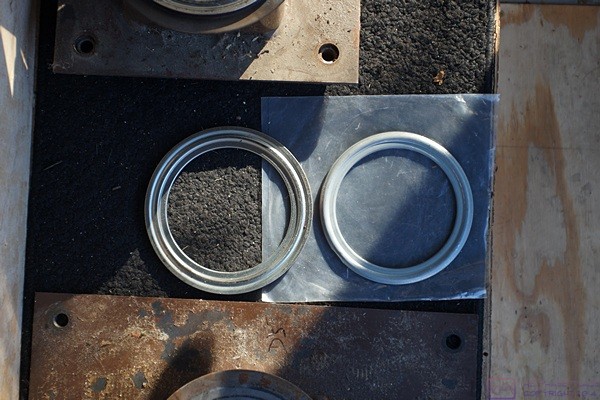 Not having any running water I wiped out the bowl with paper towels as best I could.  The directions called for lubricating the main O-ring with silicon grease.  I knew I had some from the last time I changed the filter.  It was hiding in plain sight but took me a while to find.  After greasing the gasket and installing it back on the bowl, I put in the new filter element and screwed the bowl back into the filter head, tightening it with the filter wrench.  I turned the well pump back on, opened the inlet and outlet valves for the filter, and let the trapped air out with the purge valve.

Our filter housing takes a larger than usual element.  It is 10″ long, which is the most common length, but 5″ in diameter, which is much bigger than usual.  It’s a dual density spun polypropylene material with a 50 micron nominal rating at the large outside surface and a 5 micron nominal rating towards the smaller core.  These filter elements are not available at the local home stores so I get them from Adam’s Well Drilling and Water Treatment, who installed out current water treatment system.

I gathered up the laundry and put a load in the washer.  I took the label from the new filter element and headed out on an errand run.  My first stop was Adam’s where I bought four filter elements and two bottles of chlorine tablets for the taste and odor portion of our water treatment system.  Wilson Marine is located next door to Adam’s so I stopped there to see if they sold marine grade plywood.  They didn’t but I had a good chat with the associate.  He suggested that for patching the floor in the bus I just use treated plywood or use Thompson’s Water Seal to treat whatever wood I use. 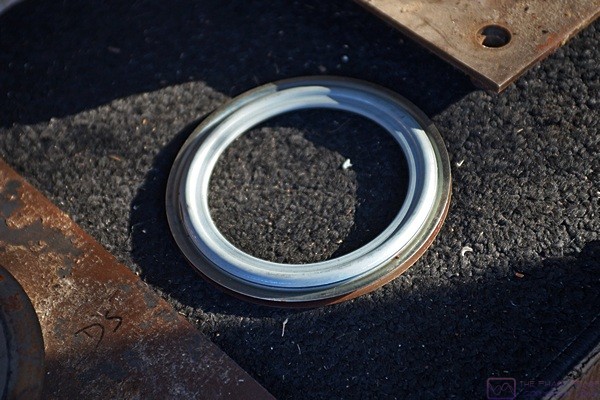 My last stop was O’Reilly’s Auto Parts.  Their parking lot was finally open so I could park near the door.  Ronald had me load the containers of used oil and the bag of filters into a shopping cart.  The bag had leaked onto the paper towels I put under it in the back of my car so Ron gave me a cardboard box to put it in.  He simply put the bag of filters in a container but he emptied the six containers of oil and gave them back to me.  They recycle oil but not the containers.

When I got home Linda checked to see if we could take the plastic oil bottles to Recycle Livingston.  Used motor oil is considered hazardous waste and anything that has had used motor oil in it is considered a hazardous material so we could not take the containers there.  I helped Linda load all of the other recyclables into my car and she made a run to the recycling center, the first in a few weeks.  After moving the laundry from the washer to the dryer and putting another load in the washer I got back to work on the bus floor. 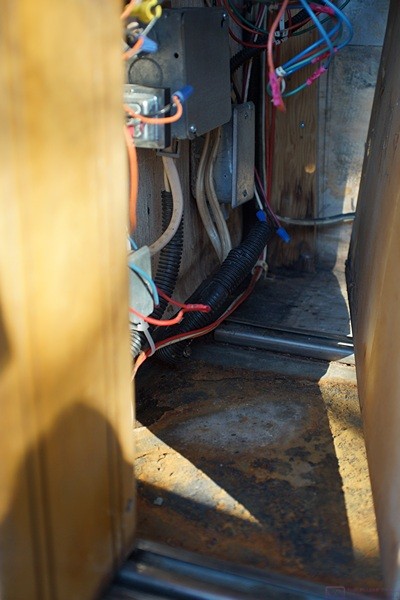 The area behind the panel to the right of the co-pilot/navigator seat. The mouse nest is gone and the damaged wood has been removed from between the side-to-side seat mounting rails.

I spent most of the afternoon working on the floor under the front passenger seat.  First I removed the blocking that provides support for the bottom edge of the switch panel but also spans the three floor boards.  I cleaned out the mouse nest behind the switch panel and found the skeleton of a small mouse.  I then got the piece of wood between the mounting channels out.  The drain line for the front CruiseAir evaporator went through this floor near the outside edge but the floor was rotted enough that I was able to break out the wood on the back side and pull the board out.  As I did this I was reminded, once again, about how much of this conversion was built with the idea that it would never have to be disassembled.

I took a break for lunch, which was leftover lentils and quinoa pilaf with some fresh fruit.  After lunch I resumed working on the floor under the front passenger seat in the bus.  I managed to remove most of the rusted metal filler plate.  I made a lucky guess as to where my wire brush was stored and used it to clean the surface of the rusted metal that remained.  I played with different combinations of wood thicknesses and pondered how I will rebuild this area.  I then sprayed the rusted areas with POR-15 cleaner/degreaser and scrubbed them with a sponge soaked in hot water.

I moved to the driver’s seat area and repeated the process.  There was one area with damaged wood that I still had to deal with.  There was an edge about 10 inches long capped with two thin gage metal angles that were badly rusted.  I removed as much of the angles as I could.  I cut off a strip of wood about 2″ wide and 10″ long and removed the rest of the angles.  I wire brushed the area but left the POR-15 cleaner/degreaser for tomorrow.  In anticipation of applying the POR-15 tomorrow and coating it with black spray on rubberized undercoating paint I began masking off the area with painter’s plastic.

For dinner Linda made a salad, roasted eggplant with garlic and breadcrumbs, and mock fish with vegan tartar sauce.  We finished the Frey Natural Red wine with our meal.  I would love to support this company but this wine is too dry for my pallet.

PBS had an interesting lineup of shows this evening on continental formation, natural wonders, and the human brain.  I dealt with e-mail before the shows and we turned in after the last one.  Chuck and Barbara were planning on leaving this morning, southbound for Florida in their 1993 H3-40 Liberty motorcoach.  I did not have any messages from Chuck today so I presume they got away as planned.  They bought a lot at the Pelican Lake Luxury Motorcoach Resort in Naples where they have spent the last six winters and that is where they are headed.  We will be staying about 90 minutes north of there in January and February and will get together with them as time and commitments permit.  We are looking forward to seeing their lot; it has a coach house and they are doing some landscaping, including large palm trees.