We left the Green Creek Inn and RV Park at 7:30 AM and headed for the East Entrance of Yellowstone N. P. (YNP) for the third time in four days.  The 32 mile drive is different each time based on sun angle, clouds, and direction.  We see it differently, and have seen different things, each time.  As before, we drove the 27 miles from the East Entrance to Fishing Bridge.  We passed through and headed southwest along the lake on the Grand Loop towards West Thumb and Grant Village, 21 miles distant.  We drove through Grant Village to have a look but did not stop. 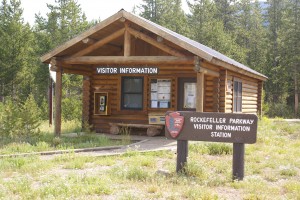 The JDRJMP Visitor Center closed due to sequestration. Stupid Congress.

The road south from Grant Village leads to the South Entrance 22 miles away, which is the northern gateway to the John D. Rockefeller Jr. Memorial Parkway (JDRJMP) and Grand Teton National Park (GTNP).  We could see the Tetons by now, and they were almost unreal.  We exited YNP and entered the JDRMP around 9:30 AM and stopped at the JDRMP Visitor Center.  It was closed (due to sequestration cuts) but GTNP maps and information sheets were available. 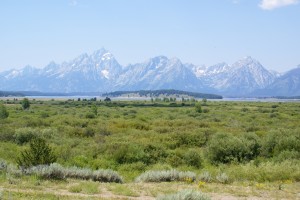 A view of the Teton Range. The haze is smoke from western forest fires.

We continued down the JDRMP towards the north end of Jackson Lake and the Colter Bay area.  We stamped our “Passport” at the Visitor Information Center and took in the view.  Colter Bay is one of the developed areas in the park.  There is a major RV campground is located here, and there were lots of people out and about. 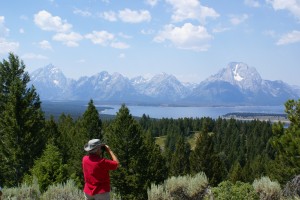 Linda looking at the Tetons from Signal Mountain.

We continued on towards Jackson Lake Junction and drove in to the Jackson Lake Lodge area but did not go in.  We drove the main loop in a counter-clockwise direction, traveling south along the east shore of Jackson Lake.  We took the Signal Mountain Road to the top of Signal Mountain and were rewarded with wonderful views of the Tetons to the west and the Snake River Valley to the east. 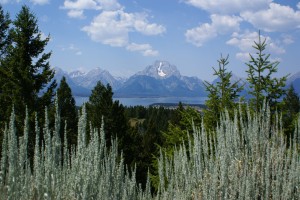 Another view of the Tetons from Signal Mountain. 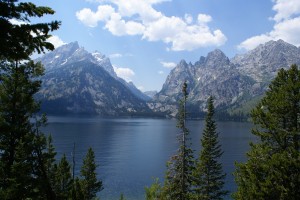 At the North Jenny Lake Junction we took the side road that leads to Jenny Lake Lodge.  This road afforded the best (closest, most intimate) view of Grand Teton and the surrounding peaks and valleys.  From there we continued on south towards Moose Junction and the Moose Entrance and stopped at the Craig Thomas Discovery and Visitor Center, a newer building with fabulous architecture, views of the Tetons, and exhibits. 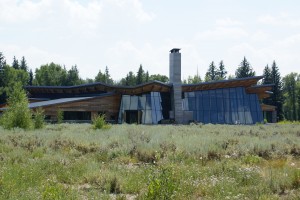 The Craig Thomas Discovery and Visitor Center near Moose Junction.

We rejoined the main road and headed north along the eastern edge of the Park through the Snake River Valley towards the Moran Junction Entrance.  This drive affords more distant views of the Tetons, but we did not take many pictures.  It was afternoon by then and the combination of slight backlighting and the thick smoke haze from western forest fires did not make for good photographs.  From Moran Junction we returned to Jackson Lake Junction and the Jackson Lake Lodge.  I called Steven, our intrepid co-leader from our recent Habitat For Humanity build in Sheridan, but I got his voice mail.  Steven had been at Colter Bay Campground with his family for the last two weeks and we thought we might catch him.  (As it turns out he was still in the park but had “gone fishin”.)

We had gone into several other Lodges along the way, but had not found the (old, famous) one I remembered from my visit here 50 years ago.  We went into the Jackson Lodge this time, and there it was.  From the lobby you walk up a flight of stairs to a sitting room with a west facing wall of tall windows that frame Mount Moran opposite Jackson Lake.  This is one of the classic lodge views of the national park system.  There is a restaurant adjacent to this lobby with windows facing the mountains.  I remember fondly eating there on my childhood visit.  The restaurant is pricey, but we would have gladly dined there if there had been anything on the menu we could eat.  Alas, there was not. 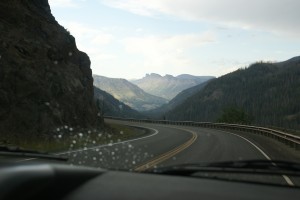 Headed back to Wapiti on the Buffalo Bill Cody Scenic Byway.

We traveled about 250 miles in the car each of the last four days, 1000 miles total, 75% of it in federally managed areas.   Today we were only outside federal property for the few miles between our RV park and the eastern edge of the Shoshone N. F. on westbound US-14/16/20.  This stretch of US-14/16/20 is known as the Buffalo Bill Cody Scenic Byway, and is worthy of a visit in its own right. 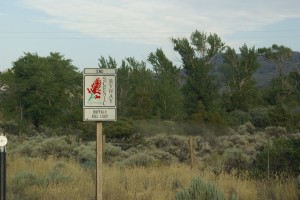