I’m sure everyone who is old enough to remember September 11, 2001 remembers exactly where they were and what they were doing that morning.  Along with Pearl Harbor and the Invasion of Normandy 9/11 is certainly one of the most somber days of the year.

I was up late last night so I did not get up until 8 this morning.  I took a warm shower which was very refreshing.  (It was chilly overnight.)  I then fed the cats and made the coffee.  Linda got up and washed the blueberries, and we had granola for breakfast.  She worked at her desk while I researched expanded metal mesh.  It is readily available online in a wide variety of forms and basic stuff is apparently in stock at The Home Depot in Howell.

Linda needed to make deposits at two banks in Howell so we added The Home Depot to our errand run.  We picked up two small sheets of decorative metal screen and some other miscellaneous items.  By the time we got back to the car I had already decided that would probably not use the metal screens but we took them home anyway.

We finally got busy in the bus at noon.  Linda started putting the drawers back in and changing the handles in the cabinets.  It turned out that we needed #8-32×3/4 machine screws for at least some of the cabinet doors.  It also turned out that every drawer in the coach fit in a unique location.  In most cases it was obvious where a drawer went, but not all.  While she dealt with that I worked in the bathroom.

A portion of the OTR HVAC return air grill in the bathroom had been cut out, presumably by Royale Coach, but was not being used to pass plumbing or wiring.  It was yet another point of access for mice to get into the coach via the HVAC system (if that’s how they are getting in) but I wanted to seal it up while I had the chance (just in case it was).  I wanted to preserve the return air flow functionality of that area, however, buy covering it with expanded metal mesh.  I had salvaged some from the old furniture but had already used it as temporary screening on the HVAC duct by the living room sofa.  I had to uninstall a piece from there and cut it down to the right size.

It took way too much time to find my metal shears but I eventually did, in a tub with garden tools of all places.  I hate it when that happens.  It was an inauspicious and inefficient start to the day’s work.  Some of the inefficiency in this project can be directly attributed to the fact that we are still not fully moved in to this house after 2-1/2 years and do not have all of the tools and supplies unpacked and organized in a proper shop.  We spend too much time looking for things and even more time driving to the store to buy something we probably already own but cannot find. 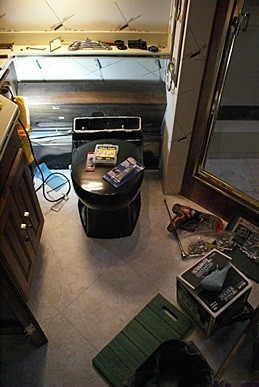 The Microphor LF-210 air-flush toilet set back in place in the bathroom.

We moved the toilet from the bedroom storage box to the bathroom and set it approximately in place.  We left the wood cover off the HVAC/wiring chase and then moved the toilet into position as far as possible.  Final positioning required the drain to be connected.  It was difficult to disconnect and even more difficult to reconnect.

The toilet outlet and the drain pipe get connected by a rubber sleeve with a stop in the middle.  A metal compression sleeve with two integral worm gear band clamps then goes around the rubber sleeve.  In order to get this assembled I left the compression sleeve off and got the rubber sleeve over both pieces.  We were the able to move the toilet back and make sure the two pipes were fully seated but it was a lot harder than this makes it sound and took a lot longer to do that it did to write these few words.

To get the compression sleeve on I had to unwind the worm screws until the bands popped out.  I spread it open and slipped it over the rubber sleeve.  I then put a zip tie around it to compress it and hold it in place while I bent the compression bands around and back into the worm gear.  Once I got them to “bite” I was able to use a 5/16ths socket on a very long extension to reach inside the back housing and tighten the bands.  Again, it was a lot harder to do than this description suggests and took quite a while to accomplish.  There is very little room to work inside the back of his toilet and the drain/clamps are at the very bottom near the floor with the only access being from above.

Next was hooking up the water and that was ordeal in its own right as I could not get the water line to line up with the plumbing in the toilet.  I eventually realized that the tile floor extended back over the bottom flange of the HVAC duct where the water supply line used to sit.  We heated the tile behind the toilet with a hair dryer and I then used sharp utility knife to trim it.  The nine inch piece of Qest pipe with nuts on both ends still did not want to line up with the supply pipe or toilet connection.  I eventually got it connected but it was a struggle. 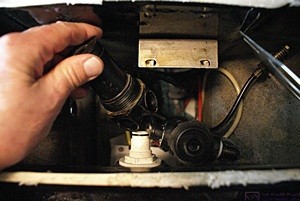 The vacuum breaker (L, in my hand) and the air/water sequence valve (R) as viewed looking straight down into the back of the toilet. The Microphor LF-210 toilet does not have a water tank. The entire back of the toilet is full of valves, air lines, and water lines.

Last, but not least, was the air.  The Microphor LF-210 is an air-flush toilet that uses 1/2 gallon of water per flush.  I started the bus to pressurize all of the air systems.  Once the auxiliary air tank was full I had Linda hold a rag over the open end of the air line and gave it five good blasts of air to blow out any debris that might have gotten in there.  I then shut off the air supply and connected the air tube to the flush actuator.  I turned the air supply back on, turned on the water pump, and opened the water valve.  Everything looked OK so I flushed the toilet.  Everything worked but we had a leak between two components where we had never had a leak before; at least not as far as I knew.  It was 4:30 PM and it was now obvious that we were not going to accomplish most of what we planned/needed to get done today.

The leak was between two of the fresh water components, the air/water sequence valve and the vacuum breaker.  The air/water sequence valve has a pipe with an O-ring that slides into a matching hole on the vacuum breaker and the leak was at that junction.  The vacuum breaker has a second hole, at a right angle to the first one, which slides over another stub with an O-ring that is screwed into the back of the toilet (inside) and feeds water to the bowl.  I ASSumed that the leak was due to the O-ring between the two parts having failed.  All told I spent another 6 hours on trying to fix the leak, including trips to various stores for O-rings, etc.

About 1/2 hour before I quit working for the night it occurred to me that the leak might not be the O-ring as the pipe with the O-ring is threaded into the air/water sequence valve.  It’s a pipe, so it’s hollow, but it threads into something and is smooth on the outside with nothing to put a wrench on.  Looking in the end, I saw that internally it was a hex socket.  I got my Allen wrench sets to see if I had the right size, but I didn’t.  My hex keys only go to 3/8″ and this was bigger than that.  It was 10 PM and I had spent 10 hours working on the installation and repair of the toilet without successfully completing the task.  Some days are like that and you have to take them in stride.  If you can’t (or won’t), converting (or reconverting) a bus is probably a bad choice of hobby.  For that matter so is owning a house and trying to maintain it yourself.  I guess life really is easier if you can just throw money at problems.

Given the progress of the work today we realized that we would have to delay our departure for Edwardsburg/Elkhart until at least Tuesday morning, and might not be able to leave at all if I could not get the toilet repaired without ordering parts.  We considered alternatives, including me taking the bus by myself to Coach Supply Direct and then bringing it home, skipping the GLCC rally in Elkhart.