I was up at 7 AM and ready to leave for breakfast with the other SLAARC members who would be setting up our temporary field site for the ARRL Field Day event.  I called the SLAARC repeater and Steve (N8AR) came back and wanted to know if I had the site use permit from the township?  No, I did not.  Paul, N8BHT, got on the air and said he gave it to Linda so I went back home.  Linda was up but had no recollection of receiving it.  We looked through the materials she got from Paul but could not find it.  I left again for breakfast but after more radio QSO went back a second time to retrieve all of the records and bring them with me to the field day site.  (Our best guess is that he gave the permits to the other Linda (NF8C) who is the club secretary. 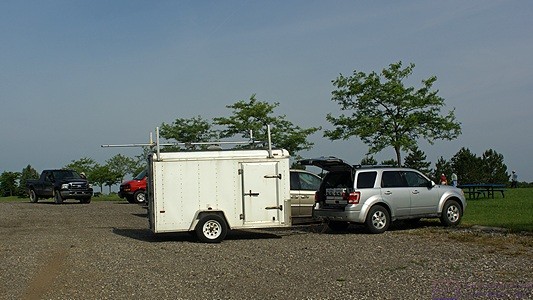 By this time it was too late to make it to breakfast so I stopped for coffee and fueled my car.  Mike (W8XH) also did not go to breakfast with the group in South Lyon so we were the first to arrive at the site.  Another 10 guys showed up shortly thereafter.  John’s Sanitation then arrived and dropped off our rented porta-potty.

We had 12 people for most of the day and 14 total who were there for at least part of the day.  It was a good group and just the right size for the task.  We worked steadily from 9 AM until almost 5 PM except for an early afternoon lunch break.  By the end of the day we had erected two towers and set up six antennas (20m beam and 6m beam co-located on the taller tower, two off-center fed dipoles from the taller tower, a 40m crossed dipole from the shorter tower, and a 40m 1/4 wave vertical with four elevated counterpoise wires).  We also put up three radio tents, a screen room, and the big food tent. 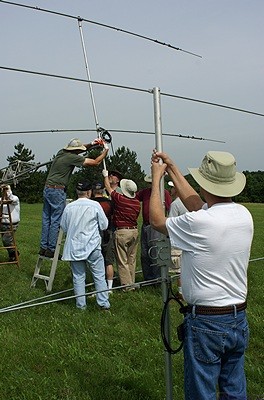 Larry (K8UT) holds the 6m beam while Steve (N8AR) and others attach the 20m beam to the mast of the taller tower.

The weather was cloudy and dull and not the best for taking photographs but I took pictures anyway.  I had to be deliberate in my shot selections, however, as both of my memory cards were almost full.  All of the work that needed to be done today was finished by 4:30 PM and most of us took off.  Our Field Day chairman, Paul (KD8SNZ), and a new member, Ron, setup their tents as they would be spending the night and keeping an eye on the site.  Steve (N8AR) and Eric (K8ERS) stayed a bit longer to test the antennas using the mobile radio in Steve’s SUV.

Back home I took a nap for an hour before dinner.  Linda grilled Portobello mushrooms and corn on the cob and cut up some fresh strawberries and cantaloupe.  After dinner I went to my office and transferred all of our recent photographs from the Sony alpha 100 DSLR to my computer and then to our older NAS device which we had with us this past winter.  I then started backing up all of the photographs we had taken since December 2014 from the old NAS unit to the new one.  This involved a significant number of images, a lot of gigabytes of data, and took a bit of time.

Rather than sit around waiting for file transfers to finish I decided to turn on the Icom IC-7000 ham radio and see if I could figure out why I could not hear the Novi 440 repeater on Wednesday when we tested the antenna and coax installation.  I checked the Nifty guide for the Icom IC-7000 and, as Mike had suspected, I did not have the Tone Squelch frequency set correctly for the Novi repeater.  I changed the mode on the 440 MHz band from ‘Tone’ to ‘TSQL’ and then caIled Mike (W8XH) on the phone to see if he could help me do a radio check.  We spent about an hour going back and forth between the Novi and South Lyon repeaters.

With the correct settings I was able to work both repeaters although I had a lot of background noise (static).  I played with the noise reduction (NR) and pre-amplifier functions and both seemed to help.  Mike tried various combinations of power and simplex operation and we determined that the basic problem seemed to be a weak signal in both directions.  I am still suspicious of the fact that I do not have the Go Box grounded as I vaguely recall from three years ago having noise problems with this setup until I grounded the box, which is tied to the radio ground. 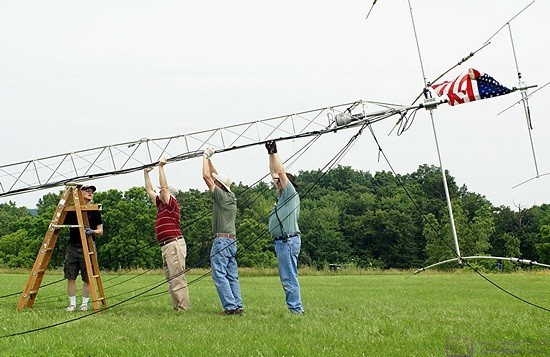 Field Day is an “all hands on deck (antenna)” event for our SLAARC group.

Mike was suspicious of the coax I used to go from the lightning arrestor to the radio but looked up the specifications on my Diamond X-50N antenna and suggested that an antenna with more gain might be in order.  We also discussed the location where I placed the antenna on the tower.  Although most of the antenna is above the tower it is on the northwest leg.  The two repeaters lie to the southeast so the tower may be ‘blocking’ some of the signal although that does not seem likely to me.  Of more concern to me is that I mounted the base of the antenna so that two of the three counterpoise (ground plane) rods are even with, and parallel to, two of the three topmost crossbars.  If anything is being blocked it is likely those as the crossbars are between the rods and the repeater locations.

Ed (KD8OSM) jumped in briefly to let us know that I also had a ‘hum’ that sounded like the 60 Hz power line frequency only higher pitched.  I have a small fan installed in the back of the Go Box so I hummed the same pitch as it was producing into the microphone and both Ed and Mike confirmed that this was the tone they were hearing.  The fan is audible, but not that loud, and was two feet behind the microphone so I would be surprised if it was picking up the fan noise.  It is possible that the fan is inducing the hum electrically, but I believe it is a DC fan, so that seems unlikely.  I do not have an AC line filter installed on the fan, or anywhere in the box, so that may be a next step. 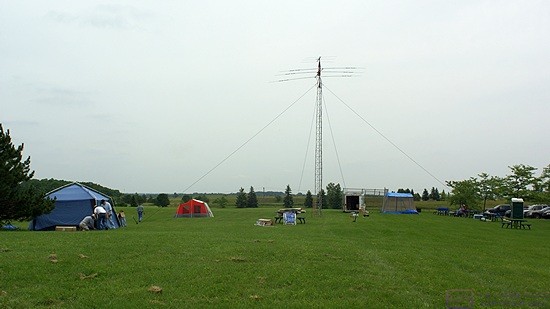 At the SLAARC Field Day site atop the Lyon Township Atchison Memorial Park the larger of the two towers is up and secured. It has a 6m beam antenna on top of 20m beam antenna on a common mast with a rotator. We also attached one end of an off-center-fed dipole to this tower.  Tents are being erected to house the various operating stations.  The weather was overcast and forecast to get much worse before Field Day as over on Sunday.

Mike and I wrapped up our QSO and I shut the radio off.  I checked my e-mail and saw that the May 2015 issue of Bus Conversion Magazine was available.  I logged in to the website and downloaded both the standard and high definition versions of the April and May digital editions.  By the time I got to bed it was well after 11PM.  I finished up yesterday’s blog post draft and outlined as much of today’s post as I could before I lost the sequence and details of the day’s events.